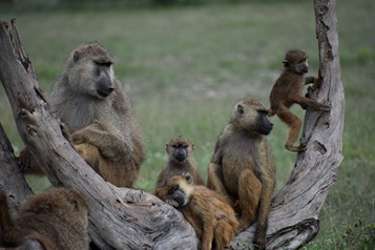 Co-led by Duke's Susan Alberts, the Amboseli Baboon Project is one of the longest-running studies of wild primates in the world, ongoing since 1971. Photo by Chelsea Weibel, University of Notre Dame

Finding love in a small, isolated place can be tough when everyone is a familiar face, or when half the dating pool is already out because they’re all close relatives.

That’s no less true for the wild baboons of Amboseli, who live in close-knit groups of 20 to 150 at the foot of Mount Kilimanjaro in Kenya.

A new Duke University-led study takes an in-depth look at the various ways these monkeys keep their family and romantic lives from getting too intertwined.

Drawing on 48 years of data on the family trees and mate choices of 1,624 wild baboons, the researchers were able to better understand how baboons avoid inbreeding, but also where their barriers break down.

Because closer relatives have more similar DNA, inbreeding increases the chances that offspring will inherit two identical copies of a defective gene -- the same version from each parent -- and no “normal” copy to compensate for its ill effects.

Infant baboons in captivity are much more likely to die at birth if their parents were closely related. But this rarely happens in the wild, said senior author Susan Alberts, professor of biology at Duke. Sifting through pedigree data on 607 offspring born between 1971 and 2019, Alberts and colleagues found that only six infants -- 1% -- were born to parents who were close kin.

The researchers say that’s partly because, like in many monkeys and apes, baboon brothers and sisters go their separate ways as they grow up. While females spend their whole lives within the group where they were born, males leave their families as they reach adulthood to seek out other groups and make a life for themselves elsewhere.

That, coupled with high mortality rates for wild baboons, means that opposite-sex kin rarely overlap in adulthood, since their time together is cut short by death or dispersal, the authors report.

“The risk of inbreeding for your average baboon is pretty low,” Alberts said. “They don't have that many opportunities.”

Even when close relatives do live together as adults, they go out of their way to avoid sexual contact.

The researchers combed through detailed records of courtships between 178 adult females and 208 males to put together a picture of baboon mating choices. For each female, they identified which males courted her during her most fertile times: following her around, grooming her, mounting her, and keeping her from the advances of other males during the days in her cycle when she was most likely to conceive.

The researchers saw from the data that baboons generally steer clear of mates that are half-siblings or closer. Genetically speaking that means any animal with whom they share 25% or more of their DNA.

But baboons proved less discriminating with their father’s side of the family than their mother’s. Mother-son dalliances were almost nonexistent, but things got murkier between fathers and daughters, even though father-daughter pairs share the same amount of DNA as mother-son pairs. And while half-siblings from the same mother managed to avoid each other, “paternal half-siblings appear to make more mistakes,” Alberts aid.

The most likely explanation, Alberts said, is that baboons simply have more familiarity with the female side of the family they’ve known since birth. It’s easier for a male baboon to recognize his maternal sisters, since they all grew up suckling the same mom, but paternal sisters are more of a mystery.

“The particularly strong bond that mothers form with their offspring give them a very reliable cue about who their relatives are,” Alberts said. “By contrast, while fathers can certainly play a big role in their offspring’s lives, the fact that this species is not monogamous means that paternity is never certain. That makes the cues of paternal kinship less reliable, more error prone.”

The study appeared Feb. 24 in the online edition of Current Biology.