New study shows that as populations of people gain immunity to dengue, it drives evolutionary pressures that select for viral evolution 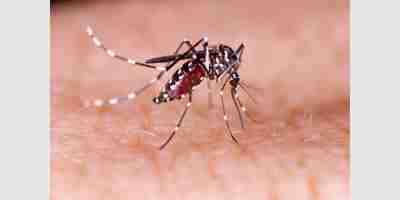 The Aedes aegypti mosquito species, shown here obtaining a blood meal, is a vector for the dengue virus. (iStock)

New research by a team of University of Florida investigators, and others, provides evidence that host immunity drives evolution of the dengue virus. The work published Nov. 18 in Science, retrospectively analyzes two decades of dengue virus genetic variation from Thailand, alongside population-level measures of infection and immunity.

There are four types of dengue virus, and all four have co-circulated in Thailand since the early 1960s. This provides an opportunity to study how the viruses compete against each other for human hosts.

“We wanted to understand the ecology and evolution of dengue viruses circulating in one place over a long period of time,” says the study’s lead author, Leah Katzelnick (pictured below), previously a post-doc in biology at the University of Florida and now Chief of Viral Epidemiology and Immunity Unit at the National Institute of Allergy and Infectious Diseases.

“We want to understand if or how immunity is driving extinction or persistence of particular lineages of dengue virus circulating in this one place. To do that, we characterized the immune signature of dengue viruses isolated in Bangkok over a long period of time,” says Derek Cummings, senior author and professor of biology at UF.

The new study used 1,944 archival blood samples from Bangkok. The samples were preserved from people known to be ill with dengue and they represent all four dengue virus strains from every year between 1994 and 2014. The team genetically sequenced more than 2,000 virus samples.

The researchers then performed tests on a smaller subset of samples that represented a time series of each strain. From this, they then characterized the antigenic relationship of the strains to each other through time. Antigenic relationships characterize how well an immune response to one virus protects against other viruses.

“We found that there is a pattern like influenza, where we get different viruses every year that are driven by natural selection for viruses that evade the human immune response to the population,” says Cummings, who is also a faculty member of the UF Emerging Pathogens Institute. “We have shown that that this is also happening with dengue.”

The team used a process called antigenic cartography which makes a map to visualize the relatedness of viruses.

“When two viruses are close on that map, then that means immune responses ‘sees’ the viruses as similar,” Katzelnick says. “For example, if you are infected with one virus, then an immune response to that virus would protect you against another virus that is nearby on the map.”

The team found an overall pattern of dengue virus strains evolving away from each other over the 20-year study timeframe. While the serotypes at times oscillated closer, in general they grew further apart.

“In general, it’s been thought that if you get infected with one serotype of DENV then you are immune to that serotype for the rest of your life,” Cummings says. “But there have been observations where that seems to not be strictly true.”

One explanation for re-infections is that dengue viruses may be subject to natural selective forces to evade the immune system of previously infected individuals. In essence, they must change just enough to avoid immune detection in a host where another serotype has already caused an infection.

“Our findings suggest that the dengue viruses are moving away from the viruses that generated immunity in the population in the past,” says Henrik Salje, a co-author of the study and assistant professor at Cambridge University. “It’s sort of like the flu story, dengue is evolving to escape the immunity that is in the population at any particular time. But it seems to be happening at a slower pace with dengue than influenza.”

Researchers already knew that there is a complex interplay between immunity and the dengue virus. When someone is exposed to a serotype of this virus, they will typically experience a mild infection that results in partial infection. But when they are exposed again, the partial immunity can trigger an overreaction that can lead to serious outcomes. The dengue virus appears, in these cases, to not only evade the immune response, but use it to its advantage to potentially increase its rate of growth.

“Ninety to 95% of the people showing up at a hospital in Bangkok with dengue are having their second infection,” Cummings says. “And most people who live their whole lives in Bangkok are getting infected multiple times.”

This enhanced infection phenomenon may also contribute to the evolution of the pathogen, selecting for viruses that are similar enough to take advantage of the immune response.

“Overall, viruses were growing more different from each other over time, but we also observed that they grew closer together during some periods of time, particularly early in the time series. This indicates a tradeoff between evading immunity and taking advantage of partial immunity,” Katzelnick says.

Cummings says the new work gives clues to the ecology of dengue and also is relevant to vaccine design and ongoing surveillance efforts.

“The implications are not unlike we are seeing in the COVID-19 epidemic, we need to update viral surveillance to understand a community’s immunity and what is circulating,” Cummings explains. “This paper is suggesting that the dengue viruses are changing and we need to update how we do surveillance to better understand immunity in populations and to ultimately reduce the number of people who get sick.”