Scientists have theorised a concept called ‘ergotropy’ that represents the amount of extractable work from a system by keeping its entropy (measure of randomness of a system) constant. 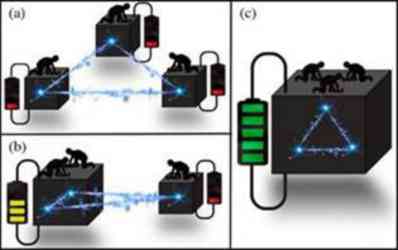 The scientists have theorised a concept called ‘ergotropy’ that represents the amount of extractable work from a system by keeping its entropy (measure of randomness of a system) constant. The idea if harnessed can open pathways for putting quantum batteries to use in a way that is much efficient than its classical counterpart.

They have proposed thermodynamic quantities that capture a signature in multipartite quantum systems called ‘genuine multipartite entanglement where several particles behave like a single unit even when they are separated.

According to thermodynamics, thermal equilibrium states are completely passive states as no work can be extracted from such a state even if many copies are available. But the situation becomes more intriguing when the states are entangled.

Local thermality or local passivity of such states does not always imply that the global state is thermal or passive, and hence useful form of energy can be extracted under global operations. From a composite quantum system ergotropic work, therefore, can be extracted by different means.

Ergotropic gap can be enhanced if the parts of a composite quantum system are prepared in an entangled state. This in turn provides an experimentally efficient method to detect entanglement which has established useful resource for several protocols, such as, quantum teleportation, quantum super dense coding, and secure quantum key distribution whose implications deeply impacted physics and computer science.

Dr. Manik Banik, scientist, S. N. Bose National Centre for Basic Sciences, an autonomous research institute under Department of Science and Technology along with his colleagues Dr. Mir Alimuddin (a Chanakya Post-Doctoral Fellow) and Mr. Samgeeth Puliyil (a BSMS project student from IISER TVM) have turned their attention to genuine multipartite entangled systems which have more drastic manifestations. In their Letter titled “Thermodynamic signatures of genuinely multipartite entanglement” published in Physical Review Letters they have highlighted that genuinely entangled states that are again of different types can be detected with the help of ergotropic gap.

Particularly, they have shown that suitably defined functions of ergotropic gap --minimum ergotropic gap, average ergotropic gap, ergotropic fill, and ergotropic volume -- can serve as good measures of entanglement in multipartite systems. Importantly, their proposed entanglement quantifiers are defined in terms of energy instead of entropy, which in turn makes it possible to measure these quantities in laboratory.

Identification, characterization, and quantification of entanglement are of extreme practical relevance. When the laboratories will be able to harness the ergotropic gap, pathways will open for putting quantum batteries to use, that will be extremely efficient over the classical counterpart, and hence the consequences will be far reaching in terms of mitigating climate change.