According to new study, certain species of bacteria in the gut interact with and help balance levels of dietary cholesterol by using it to create a molecule that plays important roles in human health. 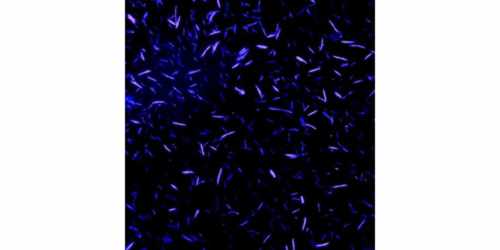 This microscope image shows gut microbes that use dietary cholesterol for their own metabolism (red) vs. non-interacting microbes (blue). Min-Ting Lee/Provided

Certain species of bacteria in the gut interact with and help balance levels of dietary cholesterol by using it to create a molecule that plays important roles in human health, according to a study published August 18 in Nature Microbiology.

Animals need appropriate amounts of cholesterol to produce bile in the liver, vitamin D and hormones, and to build healthy cell walls. Too much cholesterol, however, can build up and block arteries and cause heart attacks and strokes.

The study is one of the first to identify species of gut bacteria that convert cholesterol from animal foods into a molecule called cholesterol sulfate. Though more study is needed, early clues reveal cholesterol sulfate acts as a signaling molecule for a slew of biological pathways, including those involved in infant health and development, regulating immune cells and digestion.

The study also found that in mice, a subset of bacteria called Bacteroides help to regulate cholesterol levels in the blood. Promoting Bacteroides early in life has implications for proper development in infants and lifelong health.

“It opens the door for thinking about whether the microbiome, or specific microbes, can remove cholesterol from circulation,” said Elizabeth Johnson, assistant professor of molecular nutrition in the College of Agriculture and Life Sciences. Henry Le, a postdoctoral researcher, and Min-Ting Lee, a doctoral student, both in Johnson’s lab, are co-first authors of the study, “Characterization of Interactions of Dietary Cholesterol with the Murine and Human Gut Microbiome.”

The findings could lead to new therapies that replace the multibillion-dollar cholesterol-lowering drug industry. Potential treatments could include targeted diets, probiotics or new drugs derived from the molecules these bacteria produce, all of which could reduce the host of side effects that come with current drugs.

Although cholesterol sulfate is readily produced in human tissues, this study is the first to show that the gut microbiome can also produce cholesterol sulfate. This discovery was enabled by a new method developed in Johnson’s lab, called BOSSS (bio-orthogonal labelling sort sequence spectrometry), which was used to label dietary cholesterol with red fluorescence and track which bacteria interact with it, as those bacteria show up as red. The system was then used to sequence those bacteria’s DNA to identify the species.

“Through the BOSSS technology, we were able to trace which microbes are acting on cholesterol,“ Johnson said. “Then, we also took a note from chemistry to learn which molecules are being made when [these bacteria] interact with cholesterol.”

“I think this study is extremely relevant to all parts of a life cycle,” Johnson said. “In infants, we need to think about how lipids [fats, including cholesterol] in the diet are important for creating microbiome-dependent molecules that affect development, and for health throughout one’s life.”

While most cholesterol is made by the liver, about one-fifth comes from animal foods. The findings have important implications for the importance of breast milk for providing proper nutrition, and for further study of baby formulas that lack cholesterol, such as soy-based products, and whether they deprive infants of necessary nutrients.

In adults, saturated and trans fats in diets cause the liver to overproduce cholesterol, which then can build up in arteries as plaque.

“When we think about cholesterol metabolism and cardiovascular health, [there may be ways to] use the microbiome to modulate cholesterol levels or other relevant lipids,” Johnson said.