Growing smartphone use is causing teachers to feel more stress 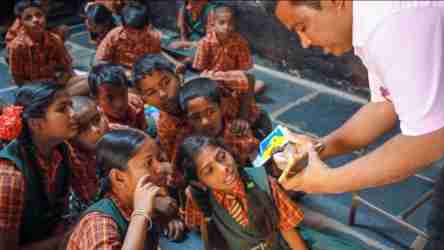 A teacher in a low-income school uses a smartphone to teach about soil.

In India, where teachers increasingly rely on their personal devices to do their jobs both in and outside the classroom, growing smartphone use is causing teachers to feel more stress and burnout, new Cornell research has found.

“Their work is being shaped by the technology,” said Rama Adithya Varanasi, a doctoral student in the field of information science and first author of “Investigating Technostress Among Teachers in Low-Income Indian Schools,” which published in the Proceedings of the Association for Computing Machinery on Human-Computer Interactions on Oct. 18. “And the problem is that you are enabling this piece of technology without creating any boundaries around it.”

Nearly 60% of teachers felt burned out more than once a month, the researchers found, and half of those instructors also experienced burnout every week. Furthermore, the survey showed that 68% of these extreme emotions were due to technology-related stress from smartphone use – regardless of age, gender or school type.

Across India, teachers’ lives have been transformed by an increasing reliance on personal smartphones. While the technology provides ready access to more learning materials, it has also become a leading factor in overall feelings of teacher stress and burnout.

Varanasi – a former assistant teacher in India – spent six months studying hundreds of grade 6-10 teachers in both rural and urban communities to understand how different aspects of smartphone use and governance were causing significant technology-related stress, or technostress.

“The difference between Western settings and here is that there’s a singular dependency on one technology [a smartphone], which is being used for both private and public work, as well as for personal purposes,” he said.

Varanasi was aware of the challenges, but lacked the data to prove his theory of a direct correlation between technology use and teacher burnout. The new study confirmed that these teachers spent a weekly average of 19 hours on their smartphones doing school-related work – including preparing lessons, managing parents and completing administrative tasks. Stationed in classrooms filled with 30 to 40 students, teachers also used their devices to show educational videos, create interactive projects and reference supplemental learning material.

However, government schools and private schools took opposing stances on smartphone use, which contributed to the teachers’ workload and stress. Private schools often required teachers to turn in their devices when they arrived on campus, even though students stayed more engaged and better behaved when educators covertly used their phones to facilitate class. These schools allotted specific amounts of time for each standard lesson, and had senior staff patrolling the corridors to report and publicly shame any teachers that they caught deviating from the rules.

While government schools encouraged smartphones as a teaching aid, they took extra steps to control their use. For example, educators were told to take photos every period and submit them as digital proof that students were learning. In a work environment with high rates of teacher absenteeism and frequent class cancellations, this policy also served as another form of personal surveillance because the administration could require teachers to share their live locations.

With paperwork taking place over the messaging platform WhatsApp, the boundaries between work and life became blurred. For teachers, this meant that the administration could ask for more last-minute tasks, after hours and on short deadlines. Students frequently reached out to relearn lessons, and parents felt increasingly entitled to the teachers’ time outside of school hours.

Many of the instructors said that they regularly worked 12-hour days, on top of their other responsibilities. Additionally, as soon as teachers arrived home, the device became a family phone again, and so completing work outside of school meant competing with other relatives for access to the technology.

The need for remote education during the COVID-19 pandemic continued to exacerbate all these issues.

Varanasi said that it will take a three-tiered solution to solve these problems: new technological applications that control for certain stressors; policy-related changes that encourage healthier behavior; and empowering management to help ensure that these tools are working hand-in-hand.

Vashistha and Dell are also faculty fellows at the Cornell Atkinson Center for Sustainability.