Global elimination of meat production could save the planet 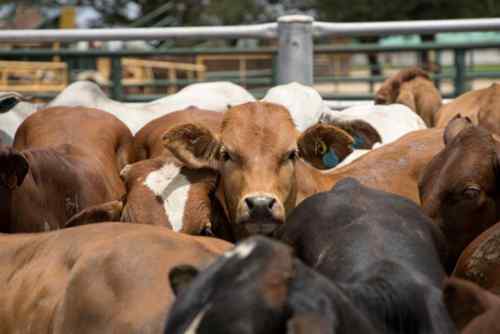 Eliminating all animal agriculture within the next 15 years would not only drastically reduce greenhouse gas emissions, but actually pull carbon dioxide out of the atmosphere as grazing land returns to its natural vegetated state. (iStock image)

A new study of the climate impacts of raising animals for food concludes that phasing out all animal agriculture has the potential to substantially alter the trajectory of global warming.

The work is a collaboration between Michael Eisen, professor of molecular and cell biology at the University of California, Berkeley, and Patrick Brown, professor emeritus of biochemistry at Stanford University and the CEO of Impossible Foods Inc., a company that sells plant-based meat substitutes.

Eisen, who consults for Impossible Foods, and Brown used a simple climate model to look at the combined impact of eliminating emissions linked to animal agriculture and of restoring native vegetation on the 30% of Earth’s land surface currently used to house and feed livestock.

They found that the resulting drop in methane and nitrous oxide levels, and the conversion of 800 gigatons (800 billion tons) of carbon dioxide to forest, grassland and soil biomass, would have the same beneficial impact on global warming as cutting annual global CO2 emissions by 68%.

“Our work shows that ending animal agriculture has the unique potential to significantly reduce atmospheric levels of all three major greenhouse gases, which, because we have dithered in responding to the climate crisis, is now necessary to avert climate catastrophe,” said Eisen, who is also a Howard Hughes Medical Institute (HHMI) investigator at UC Berkeley.

A major reason for the large long-term effect Eisen and Brown observe is that its benefits accrue rapidly. Brown argues that this demonstrates that eliminating animal agriculture should be as high a priority as eliminating fossil fuel use.

“Eliminating animal agriculture would have a quicker and greater impact over the next 20 to 50 years, the critical window for avoiding climate catastrophe, and thus should be at the top of the list of potential climate solutions,” Brown said.

“There is,” he added, “an enormous, previously unrecognized opportunity to sharply bend the trajectory of climate change within a couple of decades, with multiple additional environmental and public health benefits, and minimal economic disruption.”

The study was published Feb. 1 in the journal PLOS Climate.

Not an impossible task

Eisen and Brown have discussed the impacts of raising animals for food for years. Both men are vegans. Eisen stopped eating meat after convincing himself of the dire impact animal agriculture has on the world’s climate. Brown founded Impossible Foods in 2011 for similar reasons, began marketing the Impossible Burger in 2016, and recently launched plant-based chicken nuggets and ground pork products.

“My awareness of the potential impact was a major motivation for launching Impossible Foods,” Brown said. “In fact, I’ve been saying for years that replacing livestock in the global food system would turn back the clock on climate change. But although I knew that this conclusion was directionally correct, the environment and policy community would accept it only if we did this rigorous modeling that Mike and I did.”

Most research on the impact of animal agriculture has focused on the impact today of methane emissions from animals and their manure, nitrous oxide from fertilizer used to grow animal feed, and from the carbon dioxide produced raising and transporting animals and meat. Two reports within the past year, however, addressed a different aspect of animal agriculture: the potential that grazing land has for regrowing vegetation and sequestering carbon from the atmosphere.

Even though the animal industry today is responsible for about 16% of annual greenhouse gas emissions, by some estimates about one-third of all the carbon dioxide humans have added to the atmosphere since the dawn of animal husbandry is a result of land cleared for animal grazing and to grow feed or provide forage for animals used as food.

“What hadn’t been recognized is the much more impactful potential to unlock negative emissions by eliminating that industry,” Brown said.

The two scientists spent the pandemic years researching climate models and climate change literature to quantify the direct and indirect impact of eliminating animal agriculture worldwide. While cows and other bovids, like buffalo, represent about 80% of animal agriculture’s impact, they also considered the impact of pigs, chickens and other domesticated animals used for food, though not the world’s fisheries.

While both researchers would just as soon eliminate animal agriculture today, they chose a more realistic scenario: a phaseout over 15 years.

“A 15-year phaseout is not unrealistic — a lot of things happen on that timeframe,” Eisen said. “We went from having no cellphones to cellphones being ubiquitous in less time than that. It’s not that we’re saying we’re going to get rid of animal ag in the next 15 years, though that’s sort of the mission for Impossible Foods, but that is something we could do.”

Their conclusions are that a 15-year phaseout would immediately eliminate about one-third of all methane emissions globally and two-thirds of all nitrous oxide emissions, allowing the atmosphere to achieve a new equilibrium at lower levels of both.

While Eisen and Brown acknowledge that animal products are key to nutrition in most countries — they supply about 18% of the calories, 40% of the protein and 45% of the fat in the human food supply — they point out that worldwide, about 400 million people already live on entirely plant-based diets. Existing crops could replace the calories, protein and fat from animals with a vastly reduced land, water, greenhouse gas and biodiversity impact, requiring only minor adjustments to optimize nutrition.

Based on his experience with Impossible Foods, Brown said, “there’s compelling evidence that animal agriculture can be replaced without requiring meat lovers to compromise on nutrition or any of the sensory pleasures they love.”

Both scientists hope that their study will prod policymakers to consider the reduction or elimination of animal agriculture — barely mentioned in the most recent IPCC (Intergovernmental Panel on Climate Change) report — as an important option for reducing greenhouse gases. They look forward to a robust debate now that their data and analysis are online through the open access journal PLOS Climate.

“What we really did in the paper was try to formalize what it would mean to get rid of animal agriculture without making it too complicated,” Eisen said. “There’s a lot of uncertainty, there are a lot of unknowns, but I think probably the biggest uncertainty is whether people will look at this potential and act on it as a society.”

“I’m hoping that others, including entrepreneurs, scientists and global policymakers, will recognize that this is the most important opportunity humanity has to reverse the trajectory of climate change, and seize it,” Brown said.

“I think this is a kind of Pearl Harbor moment for science. The climate of the planet is under a bigger threat now than it’s ever been in history, and to the extent that scientists can find ways to contribute, I think it’s really incumbent upon us to do so,” Eisen said.