Getting a handle on a robotics challenge 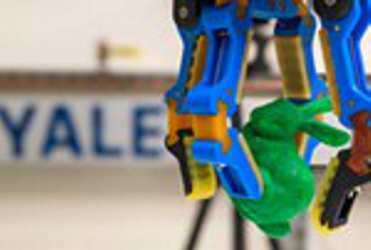 When we pick something up, we’ll often jostle it around a bit, searching to get the best grip. A team of researchers have now developed a robotic hand that does something similar - a breakthrough that could advance the field of assistive robots.

In the lab of Aaron Dollar, professor of mechanical engineering & materials science & computer science, Yale University, the team created a robotic hand that can fully rotate various objects even as its grippers occasionally break contact with the object. The results were recently published in Robotics and Automation Letters.

Andrew Morgan, a Ph.D. candidate in Dollar’s lab and lead author of the study, said the team set out to create a device “where the fingers are always opening and closing, moving their location on the actual object.”

A previous Ph.D. student, Raymond Ma, developed the original concept for the hand. For the newer version, Morgan modified the design to enable more advanced in-hand capabilities. These includes new fingertip designs and an adaptation of the internal wrist rotation.

One potential application, he said, is for assembly purposes. For instance, the device could pick up an object and reorient it so that it can insert it into a slot or place it down in a certain way.

The researchers set out to make the hand relatively simple, with as little sensor technology as possible. The point is to make a practical device that’s not too expensive or requires too much maintenance. “It required us to make a more robust system than what has traditionally been required,” Morgan said.

To make the gripper move, the team uses a tendon-driven, underactuated transmission, which Morgan said is "more forgiving" due to its inherent passive adaptive nature. That is, there are fewer motors than there are joints in the hand, which makes the hand move in such a way that it better "wraps" to its environment.“We don’t need to know as much about the environment as you normally would,” he said.

One notable advance in the design is that the device also has a camera that tracks in real time the position of the object that it’s manipulating.

“By coupling the adaptive nature of the hand and this external feedback, we were able to control the hand purely from vision, and without touch sensors,” Morgan said. “We use the feedback from this camera, so that it’s always saying ‘Hey you just took an action - how good was that action, and how can we make sure that the next action will be better?”

The device successfully manipulated objects with a variety of shapes, including a sphere, a toy car, a plastic bunny, and a plastic duck.

“We were able to complete some pretty complex in-hand manipulation tasks that have historically been very difficult for a robot to realize,” Morgan said.

Building off the project, Morgan said they would like to test the limits of the device by trying it on a greater variety of objects.

“Ultimately, we’re trying to build more capable service robots, so testing in-home tasks would be interesting and useful,” he said. This might include picking up dishes, he said, or manipulating a brush and placing it in a holder.

In addition to Dollar and Morgan, co-authors are Kaiyu Hang, Bowen Wen, and Kostas Bekris.