Getting a grip on hand function

The study brings new understanding about neural control and evolution of the human hand, and potentially new ways to aid disabilities 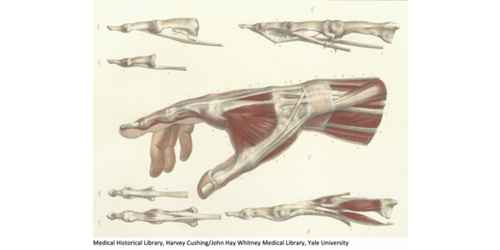 Humans are unparalleled in the animal kingdom in hand dexterity. We use tools, hold pens, thread needles, and more, with little thought about the challenges the nervous system faces when precisely applying forces with the fingertips. A team of researchers set out to find what it takes to grasp with our fingertips, which is crucial for human hand dexterity. Published in Proceedings of the National Academy of Sciences, the results bring new understanding about neural control and evolution of the human hand, and potentially new ways to aid disabilities.

Led by Madhusudan Venkadesan, associate professor of mechanical engineering & materials science, the researchers looked into the stability of the fingers when applying force with the tip. Specifically, they studied what’s known as “precision grip,” in which the index finger is in a flexed posture, such as when threading a needle or handling a fine object. The problem with this style of gripping is that the finger has a natural tendency to suddenly buckle, a kind of rapid snapping motion of the joints. Maintaining a stable grip, without any kind of finger buckling, is critical to picking things up and other everyday tasks. So what’s keeping our fingers from buckling all the time?

“A classical result from mechanics predicts that a chain of rods connected with joints, called mechanical linkages, will buckle when they are compressed,” said Neelima Sharma, lead author, a former Ph.D student in Venkadesan’s lab, and now a postdoctoral scholar at the University of Chicago. “This is like a thin wire that would buckle if you tried to squeeze along its length. Fingers are also like these linkages and fingertip forces would have the effect of causing the finger to buckle.” To find out how rapidly our fingers buckle, they performed an experiment in which they asked people to push with the tip of their flexed index fingers as hard as they could on a flat surface. The finger remained stable most of the time, but occasionally snapped and buckled. The researchers wanted to know how much our reflexes account for maintaining stability. Probably not much, they decided after timing the action of buckling.

“The whole snapping motion is so incredibly fast – mostly under 50 milliseconds,” Venkadesan said. Usually, it takes around that amount of time for a nerve signal from the fingertip to reach the spinal cord and back. “So it’s barely enough time - and most likely not enough time at all – for a stabilizing reflex response.”

If not neural reflexes, what could be responsible for keeping our fingers stable? The researchers thought that the spring-like action of our muscles may be responsible. But a mathematical model they developed for the finger predicted that using muscles to provide stiffness would come at the cost of reduced strength. So they conducted another series of experiments where they applied external stiffness by fixing a splint on the finger’s joints, letting the muscles focus on force and not stability.

“When we added a splint, everybody was stronger,” Venkadesan said - about 30 percent stronger on average. Even more interesting to the researchers was how these gains varied among subjects. “We wanted to understand why it’s different from person to person. And what you see is that people who reduced their co-contraction more could produce more force.” Co-contraction is the simultaneous contraction of multiple muscles that helps us increase stiffness, like tensing up your body by contracting a lot of muscles.

They concluded that the motor skills of precision grip come from a trade-off between finger stability, strength, and flexibility, which requires careful neural control of multiple muscles. When grasping, muscles on either side of the finger joints co-contract to stabilize the joints but reduce the strength and compliance of our fingers.

Venkadesan compares the fingers, hand and arm to a marionette, its strings being the muscles and tendons. “Your neural system has to be careful in how it’s orchestrating all these muscles to operate this marionette and keep it stable,” he said. “Once it’s learned that, the act of stabilization happens due to the mechanics of the system.”

And by mathematically modeling these mechanics, the researchers were able to determine that they’re not unique to fingers. “It is a more general problem that applies to any multi-link body part - entire legs, entire body,” he said. “Some version of this three-way tradeoff - stability, strength, and flexibility - inevitably applies.”

In addition to opening avenues for treating injuries and building prosthetics, this window into the workings of hands and other limbs offers some directions to explore in terms of early human evolution. “Are some hand morphologies better at managing the trade-off than others? How do the hands of our earliest bipedal ancestors, from around 3 to 4 million years ago compare with the modern human hand? There’s a whole array of open questions to pursue.”