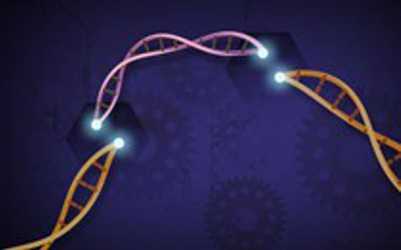 People with hereditary transthyretin (ATTR) amyloidosis have a mutation in the transthyretin (TTR) gene, which means they produce an abnormal protein that gradually builds up in the heart and nerves. Symptoms include numbness in the hands and feet, loss of control of the bowel and bladder and immobility. The condition gets progressively worse and is ultimately fatal. Most of the treatment options available to patients have involved managing the symptoms and preventing progression of the disease. But following strong interim results from the first six patients in a Phase 1 clinical trial of a gene-editing treatment led by the UCL National Amyloidosis Centre at the Royal Free Hospital, London it is hoped this therapy will be a breakthrough for patients suffering from this debilitating condition.

Patients on the trial receive, via a one-off infusion, a molecule known as CRISPR/Cas9, which inactivates the incorrect gene within the liver cells. With the gene no longer active in the liver, it is expected that the patient will only produce negligible levels of the harmful transthyretin protein. In the first six patients, the investigational therapy reduced production of the harmful protein by up to 96% by day 28 following treatment. There were no serious adverse events observed. The data were published today in the New England Journal of Medicine. As the trial progresses, patients will be given higher doses of the gene editing therapy with the hope that will drive the levels of toxic protein even lower.

CRISPR/Cas9, a Nobel Prize-winning technology, has been used in the past to edit cells outside the body. These are the first clinical data for an investigational therapy in which CRISPR/Cas9 is used as a medicine itself, infused intravenously to inactivate a target gene in a specific organ -- in this case, the liver. Trial lead, Professor Julian Gillmore, of the UCL National Amyloidosis Centre, part of the UCL Centre for Amyloidosis and Acute Phase Proteins, said: “This is wonderful news for patients with this condition. If this trial continues to be successful, the treatment may permit patients who are diagnosed early in the course of the disease to lead completely normal lives without the need for ongoing therapy. The global trial involves patients from the Royal Free London and a hospital in Auckland, New Zealand. The investigational therapy, designated NTLA-2001, is being developed by U.S.-based biotechnology company Intellia Therapeutics, Inc.