Gene editing gets safer thanks to redesigned protein

Researchers redesign a key component of a widely used CRISPR-based gene-editing tool, called Cas9, to be thousands of times less likely to target the wrong stretch of DNA 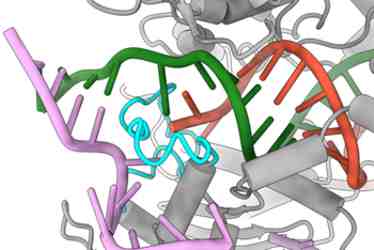 UT Austin researchers were surprised to discover that when Cas9 encounters a mismatch in a certain part of the DNA (red and green), instead of giving up and moving on, it has a finger-like structure (cyan) that swoops in and holds on to the DNA, making it act as if it were the correct sequence. Credit: Jack Bravo/University of Texas at Austin.

One of the grand challenges with using CRISPR-based gene editing on humans is that the molecular machinery sometimes makes changes to the wrong section of a host’s genome, creating the possibility that an attempt to repair a genetic mutation in one spot in the genome could accidentally create a dangerous new mutation in another.

But now, scientists at The University of Texas at Austin have redesigned a key component of a widely used CRISPR-based gene-editing tool, called Cas9, to be thousands of times less likely to target the wrong stretch of DNA while remaining just as efficient as the original version, making it potentially much safer. The work is described in a paper published in the journal Nature.

“This really could be a game changer in terms of a wider application of the CRISPR Cas systems in gene editing,” said Kenneth Johnson, a professor of molecular biosciences and co-senior author of the study with David Taylor, an assistant professor of molecular biosciences. The paper’s co-first authors are postdoctoral fellows Jack Bravo and Mu-Sen Liu.

Other labs have redesigned Cas9 to reduce off-target interactions, but so far, all these versions improve accuracy by sacrificing speed. SuperFi-Cas9, as this new version has been dubbed, is 4,000 times less likely to cut off-target sites but just as fast as naturally occurring Cas9. Bravo says you can think of the different lab-generated versions of Cas9 as different models of self-driving cars. Most models are really safe, but they have a top speed of 10 miles per hour.

“They’re safer than the naturally occurring Cas9, but it comes at a big cost: They’re going extremely slowly,” said Bravo. “SuperFi-Cas9 is like a self-driving car that has been engineered to be extremely safe, but it can still go at full speed.”

So far, the researchers have demonstrated the use of SuperFi-Cas9 on DNA in test tubes. They’re now collaborating with other researchers who plan to test SuperFi-Cas9 for gene editing in living cells. They’re also working to develop still safer and more active versions of Cas9.

CRISPR-based gene-editing tools are adapted from naturally occurring systems in bacteria. In nature, a Cas9 protein floats around in the environment, searching for DNA with a very specific sequence of 20 letters, like the X on a pirate map that indicates “dig here.” Sometimes, when most of the letters are correct, except those in spots 18 through 20, Cas9 still goes ahead and digs in. This is called a mismatch, and it can have disastrous consequences in gene editing.

Taylor and Johnson developed a technique called kinetics-guided structure determination that used a cryo-electron microscope in the Sauer Structural Biology Lab to take snapshots of Cas9 in action as it interacted with this mismatched DNA.

They were surprised to discover that when Cas9 encounters this type of mismatch in positions 18 through 20, instead of giving up and moving on, it has a finger-like structure that swoops in and holds on to the DNA, making it act as if it were the correct sequence. Normally, a mismatch leaves the DNA a bit floppy; this finger-like structure stabilizes it.

“It’s like if you had a chair and one of the legs was snapped off and you just duct taped it together again,” Bravo said. “It could still function as a chair, but it might be a bit wobbly. It’s a pretty dirty fix.”

Without that added stability in the DNA, Cas9 doesn’t take the other steps needed to cut the DNA and make edits. No one had ever observed this extra finger doing this stabilization before.

“This was something that I could never have, in a million years, imagined in my mind would have happened,” Taylor said.

Based on this insight, they redesigned the extra finger on Cas9 so that instead of stabilizing the part of the DNA containing the mismatch, the finger is instead pushed away from the DNA, which prevents Cas9 from continuing the process of cutting and editing the DNA. The result is SuperFi-Cas9, a protein that cuts the right target just as readily as naturally occurring Cas9, but is much less likely to cut the wrong target.

Other authors are Grace Hibshman, Tyler Dangerfield, Kyungseok Jung and Ryan McCool, also of The University of Texas at Austin.