From droplet to discovery 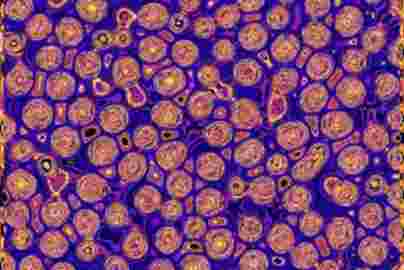 Simulations like this one helped Wilson and his team get an intuition for how the Wnt droplets work.

Stem cells overflow with potential. Their ability to become other cell types is crucial to our bodies, both during development and throughout life. But this potential can be our very downfall if it goes wrong, turning some of our most useful cells into malignant cancers.

While investigating a pathway involved in stem cell differentiation, researchers at UC Santa Barbara found that rather than forming an assembly line or rigid structure, all the proteins involved coalesce into a liquid droplet. Through modeling and manipulation, the team began to reveal how cells use this droplet to process and relay information, and how it might malfunction in cancers. Their results appear in the Proceedings of the National Academy of Sciences.

“The same processes that organize dew drops on a spiderweb are happening in the cells to make this liquid, molecular computer appear or disappear on command,” said senior author Max Wilson, an assistant professor in the Department of Molecular, Cellular, and Developmental Biology. “And when it goes wrong, it causes basically 100% of colorectal cancers and is implicated in a large number of other cancers.”

A host of mechanisms guide a stem cell to differentiate into a specialized cell type. Among the most important is the Wnt pathway — short for “wingless-related integration site” — which takes input from outside the cell, processes it and relays instructions to the nucleus. This starts a chain of actions that tells the stem cell it’s time to differentiate, as well as what type of cell to become. The Wnt pathway is involved in determining the fate of every stem cell, Wilson explained, and it appears unchanged across virtually all animals.

Stem cell differentiation is quite important during embryonic development. However, there are areas of the body where we have stem cells even as adults, such as our intestines, bone marrow and skin, to name a few. The differentiation pathways play a big role in the function of these tissues and organs.

Given its importance, Wilson and his colleagues wanted to learn how the Wnt pathway was physically organized inside the cell. They focused on two proteins — Axin and APC — that seem to provide the scaffolding for the entire process, orchestrating the intricate dance of other proteins.

Understanding a protein requires understanding its structure, as the molecule’s intricate geometry often matters as much as its composition. So the team fed the proteins’ chemical makeup to a program called AlphaFold, a deep-learning software that Google developed to predict the structures that proteins take.

The program returned “a random pile of spaghetti,” which is as close as the AI gets to a shrug and an error message, Wilson said.

This suggested that Axin and APC may be working in a very unconventional fashion. Rather than operating like a rigid lock and key, the proteins could be functioning in a much more fluid, dynamic manner. “We thought they might be forming intracellular liquids, like oil droplets in salad dressing,” Wilson said. The only way to tell was to look.

So they used CRISPR/Cas9 to add a fluorescent tag to all the major proteins they knew were part of the Wnt pathway. Then they watched through the microscope as the proteins coalesced into a liquid droplet within the cell’s cytoplasm.

It’s in this liquid droplet that most of the Wnt pathway occurs, which eventually sends a message to the nucleus telling the cell to differentiate. It also triggers changes to gene expression that dictate what the stem cell becomes. “It’s like a tiny little liquid computer, right in the middle of the cell,” Wilson mused. Despite its importance, this was the first time scientists had observed the Wnt pathway in action.

What’s more, the group observed that the droplet always formed right next to the nucleus. In fact, it sat around the centrosome — the structure that pulls chromosomes apart when a cell divides. Wilson is still exploring this aspect of the pathway. “To me it suggests this may be an inbuilt anti-cancer strategy,” he said. “It may be a way to coordinate growth, form and differentiation in tissues. We don't know yet.”

In addition to orchestrating the cadre of other proteins involved, Axin and APC seem to be the most important compounds in creating the droplet itself. Meanwhile, the Wnt proteins are the main players in the events that occur within the blob. The droplet is continuously processing a protein called β-catenin, which is produced elsewhere. The blob reads it, modifies it and sends it back out into the cell. And there are a host of auxiliary proteins to boot, many with several other roles within the body.

Surprised by what they found, the team simulated the droplet using a numerical model. They showed that having all the Wnt proteins concentrated within a droplet makes the pathway much more efficient than if it were diffused throughout the cytoplasm. The blob essentially functions as a little reaction chamber.

Continuing their investigation, the team tweaked the ratio of the proteins within the droplet. They found that increasing the Axin caused lots of small droplets to form throughout the cell, not on the centrosome. Meanwhile, turning up the APC made the initial droplet grow larger. The team is actively investigating this aspect of the pathway.

Axin and APC are not the only proteins that behave in this peculiar manner. “The nucleolus and stress granules are also examples of liquid protein condensates,” Wilson said. “We are just starting to characterize these so called ‘liquid proteins.’”

The Wnt pathway has a strong link to colorectal cancer. Intestinal epithelial cells live for only about three days before sloughing off. They’re replenished by stem cells that reside in protected indentations in the intestinal lining. When a replacement is needed, the stem cell divides, and one daughter becomes an intestinal cell as it migrates upward.

A mutation in the genes involved in the Wnt pathway can cause a cell to become cancerous —growing and multiplying with no regard to its neighbors or environmental conditions. “For instance, something like 95% of individuals with colorectal cancers have a big chunk missing out of their APC gene,” Wilson said.

Clearly, altering the gene somehow changes the dynamics and structure of the Wnt blob. And while both Axin and APC comprise the droplet, the pathway appears much more sensitive to issues with the APC gene. This is another facet of the system the team is currently researching.

There’s a large unmet need for colorectal cancer treatments. “There’s no immunotherapy for it,” Wilson said. “There’s no intervention except for chemotherapy.”

In fact, there are no drugs approved by the FDA that target the Wnt pathway. “That fact, in and of itself, suggests we might have been thinking about this incorrectly,” Wilson said. “And this new idea of a liquid orchestrating the whole process might help us design new drugs and therapies.”

“We know that the Wnt pathway is implicated in other cancers as well,” Wilson said. The researchers are looking at how cancer mutations affect droplet dynamics and mapping all of the proteins involved in the Wnt pathway. A proper catalogue should provide a list of possible targets for new therapies, he explained.