Bats trained by researchers to associate a phone ringtone with a tasty treat were able to remember what they learned for up to four years in the wild. 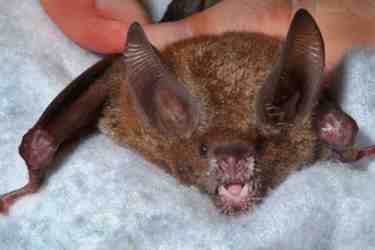 Frog-eating bats trained by researchers to associate a phone ringtone with a tasty treat were able to remember what they learned for up to four years in the wild, according to a new study published in Current Biology.

Researchers acquainted 49 frog-eating bats with a series of ringtones that attracted their attention, and trained them to associate flying toward just one of the tones with a reward: a baitfish snack.

Between one and four years later, eight of those bats were recaptured and exposed again to the food-related ringtone. All of them flew toward the sound, and six flew all the way to the speaker and grabbed the food reward, meaning they expected to find food. Control bats without previous training on the sounds were comparatively unmoved by the exposure to the unfamiliar tones.

“I was surprised,” said lead author May Dixon, a postdoctoral scholar in evolution, ecology and organismal biology at The Ohio State University, formerly at The University of Texas at Austin. “I went into this thinking that at least a year would be a reasonable time for them to remember, given all the other things they need to know and given that long-term memory does have real costs. Four years strikes me as a long time to hold on to a sound that you might never hear again.”

Dixon led this study at the Smithsonian Tropical Research Institute in Panama while she was a graduate student in the lab of Mike Ryan at UT Austin.

“The environment that previous generations experienced can be extremely different from the environment an animal is born into – and it may also change throughout an animal’s life,” she said. “Trying to figure out how animals use learning and memory is one way to figure out how they’re going to make it in a life full of change in the modern world.”

Despite the human tendency to assume a long memory gives our species an intelligence advantage, nature shows us that memory flexibility – also called adaptive forgetting – may be important for survival.

In the first phase, individual frog-eating bats captured for a series of cognition tests were exposed to a highly attractive sound in the lab: the mating call of the male túngara frog, one of this species of bats’ preferred prey. Flying to that sound was rewarded with a piece of baitfish placed on mesh above the speaker.

Over time, the sound was mingled with and gradually replaced by a ringtone, but the reward was the same. Researchers then introduced three other ringtones, none of which was connected to a food reward. Bats were trained to discern the differences and eventually no longer flew toward the unrewarded sounds. All bats were microchipped and returned to the wild.

Beginning a year later and for three additional years, Dixon captured bats and identified eight from the initial trial by their microchips. In a follow-up test of their response to the original rewarded ringtone, all eight trained bats quickly flew to the sound and were able to tell the difference between that ringtone and a new, steady tone, though many of the bats did fly to an unrewarded sound from the initial training.

When 17 untrained bats were exposed to these sounds, they mostly twitched their ears in response to the sounds but did not fly toward them.

“The study taught us a lot because there are relatively few studies of long-term memory in wild animals, and we don’t have systematic understanding of long-term memories in nature yet,” Dixon said. “If we can collect additional data on different species of bats, we could pick this apart and see what life histories select for long memories.”