Scientists have assembled the largest and most comprehensive family tree of the order primates, including both living and extinct species. 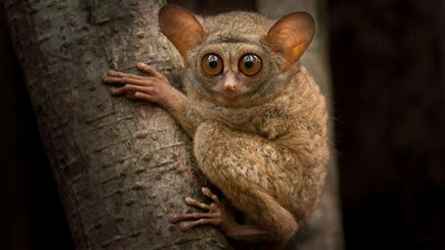 A new primate family tree covers more than 900 species—about half living and half extinct. The tree can help scientists understand more about the origins and spread of various species, such as the Indonesian spectral tarsier (pictured). Copyright Shutterstock.com

Covering more than 900 species—about half living and half extinct—the new tree can help scientists understand the history of monkeys, apes, gorillas and humans, and how species originated and spread around the globe.

“What this allows us to do is to ask some basic, but big-picture questions about the evolution of this group,” said UChicago geophysical scientist Anna Wisniewski, a graduate student and first author on the paper.

If you want to make a family tree for apes (or any other species), there are essentially two approaches. You can assemble all the fossils you have—which might not be very many. Or you can examine the DNA of modern species and work backward to estimate how the species evolved—though this requires some assumptions. Each approach has its pros and cons, and is often done piecemeal, resulting in trees that cover only some species or some geographic areas.

Working with UChicago geophysical scientist Graham Slater, Wisniewski set out to turn all of these pieces into a larger whole. She collated data from 116 studies done in the past 40 years using both approaches, into one single, extensive tree. With a birds-eye view, she and Slater could look for answers to questions about the history of us and our closest living relatives.

There are many pieces missing from the story of primate evolution, but scientists do agree on some key details. Broadly, we know that the primates originated between 50 and 80 million years ago. As they spread around the world they grew and evolved into lineages with different body shapes, characteristics, habitats and diets.

But where they originated and how and when they spread remains controversial.

“There are different ways that primates can spread around the globe,” said Slater, an assistant professor in the Department of Geophysical Sciences. “A particular species could arise in North America and disperse into Eurasia; then, new species can branch off from that lineagein North America or Eurasia or both, or go extinct in either location. By working back along tree branches, we can figure out what the most likely scenarios and ancestors were.”

Reconstructing an evolutionary tree allows scientists to ask questions about how and why primates moved and changed. They can cross-reference information such as the climate that would have existed at the time of a given species, or what food was available, and watch how those things affect species evolving or going extinct.

Throwing monkey wrenches in the works

Examining the new tree, they found several places where it disagreed with commonly held views among biologists.

For example, scientists have long debated the geographical origin of the ancestor of haplorhine monkeys—a group that today includes African, South American and Eurasian monkeys and apes and the small, insect-eating tarsiers. “It’s hard to tell because you see these guys all over the place today,” explained Slater; but their tree definitively places the ancestor in North America.

With such a large and comprehensive tree, they were also able to run “tests” showing how the answers would differ based on which approach you use to analyze the data.

Biologists who work with molecular-only data sometimes try to correct for the lack of fossils in various ways. For example, Africa didn’t collide with Europe until 30 million years ago, a tectonic shift that would have made it easier for species to move around the world. This is the kind of thing that biologists might try to artificially account for.

But when the UChicago team tested whether or not that “correction” made a difference, they found it didn’t. “That was a significant surprise,” Slater said.

In other words, there seem to be clear limits to the molecular-only approach.

“That suggests that if, say, an extinction takes out a species which was once really common—then you can try all the statistical tricks you want, but you won’t be able to rescue the results,” Slater explained.

“That’s big news for biologists,” he said. “It suggests that the window to infer past evolution of groups is pretty recent. If you try to go too far back, you simply can’t figure out what was actually going on.”

“It’s bad news if your group doesn’t have a fossil record,” said Wisniewski. Many types of animals have spotty or absent fossil records—for example, anything soft-bodied, like jellyfish, don’t readily fossilize.

There are lots of other questions that scientists can study with the tree, they said. “For example, haplorhine primates, like humans, don’t synthesize our own vitamin C, but other primates can,” said Slater. “Did we lose it for an adaptive reason? If so, when and why? We don’t know.”