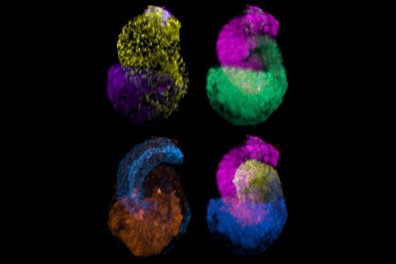 An USC-led team of scientists has managed to borrow some of nature’s pages through a comprehensive analysis of how kidneys form their filtering units, known as nephrons. Published in the journal Developmental Cell, the study from Andy McMahon’s lab in the Department of Stem Cell Biology and Regenerative Medicine at USC was led by Nils Lindström. The team traced the blueprints for how cells interact to lay the foundations of the human kidney, and how abnormal developmental processes could contribute to disease. Their findings are publicly available as part of the Human Nephrogenesis Atlas, which is a searchable database showing when and where genes are active in the developing human kidney and predicting regulatory interactions going on in developing cell types. “There’s only one way to build a kidney, and that’s nature’s way,” said McMahon, who is the director of the Eli and Edythe Broad Center for Regenerative Medicine and Stem Cell Research at USC. “Only by understanding the logical framework of normal embryonic development can we improve our ability to synthesize cell types, model disease and ultimately build functional systems to replace defective kidneys.”

To reconstruct nature’s molecular and cellular blueprints, the team studied hundreds of human and mouse nephrons at various points along their typical developmental trajectories. This allowed the researchers to compare important processes that have been conserved during the nearly 200 million years of evolution since humans and mice diverged from their common mammalian ancestor. The study details the similar genetic machinery that underpins nephron formation in humans and mice, enabling other groups of scientists to follow the logic of these developmental programs to make new types of kidney cells. All told, there are at least 20 specialized cell types that form the kidney’s intricate tubular network, which helps maintain the body’s fluid and pH balance, filter the blood, and concentrate toxins into the urine for excretion.

“By generating detailed views of the beautifully complex process by which human nephrons form, we aim to enhance our understanding of development and disease, while guiding efforts to build synthetic kidney structures,” said Lindström. The scientists were also able to determine the precise positions of expressed genes with known roles in Congenital Abnormalities of the Kidney and Urinary Tract (CAKUT). In specific types of cells, the researchers identified networks of interacting genes. Based on these associations, the team predicted new candidate genes to explore in CAKUT and other kidney diseases.