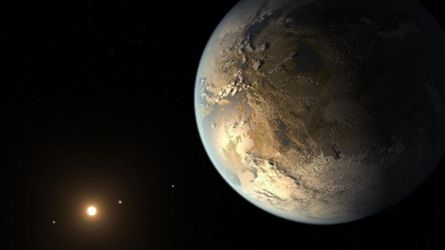 “We’re carbon-based life forms,” said University of Chicago geophysical scientist Fred Ciesla, “and carbon is an important part of keeping a mild climate.”  It can also be used as forensic tool to piece together how the earth and solar system must have formed. In two papers, Ciesla and colleagues at California Institute of Technology, the University of Michigan and the University of Minnesota laid out a history of carbon in the formation of the solar system. By examining carbon, the scientists found that a large fraction of the Earth's building blocks probably formed soon after the solar system did—within the first million years, much earlier and more precise than the previous estimate of sometime within the first 150 million years. This discovery may also inform the search for life elsewhere in the galaxy.

One of the papers, led by Jie (Jackie) Li of the University of Michigan, estimated the total amount of carbon that could possibly be contained within the Earth. The research found that, relatively speaking, the planet has just a little bit of carbon. While this amount of carbon is just right for life on Earth—enough to trap some heat from the sun, but not so much that the heat bakes the planet like it does on Venus—this Goldilocks amount of carbon is difficult to explain under the existing theory, which better accounts for either no carbon or a lot of carbon. This provides a template for the scenario: Initially, Earth began forming at much higher temperatures, so most of its building blocks formed without any carbon available. But as the solar system cooled toward the end of the process, the temperatures around the young Earth dropped below 440 degrees, allowing a small amount of the later-added pieces to contain pristine, never-vaporized organic carbon carrier molecules. This, the researchers said, can get you to that “Goldilocks” amount of solid carbon. This research slots a significant chunk of Earth’s formation into a very specific window of time, during which the temperatures ranged from above 440 degrees to just below. From other evidence, this period appears likely to have happened within the first million years or so of the solar system’s existence—a much narrower window than the 150 million years that scientists had already estimated based on when the final piece was added to the planet.