Ions of relatively abundant, light element may be able to replace lithium without much change in battery cycling life 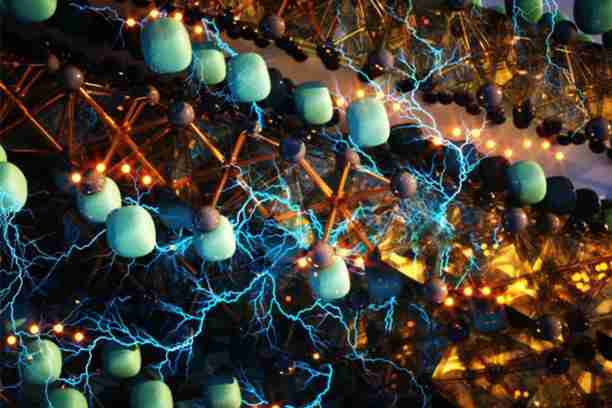 Here, layered electrides, such as Ca2N and Y2C — that have an electron occupying a lattice site — are predicted as promising hosts for fluoride intercalation because their anionic electrons create large interstices and their open layered structure enables fast diffusivity. (Courtesy: Mishra lab)

Modern batteries use lithium and cobalt, but these have a very limited supply.

Materials scientists in the McKelvey School of Engineering at Washington University in St. Louis have found a potential alternative for lithium in fluorine, a relatively abundant and light element. Their research was printed Dec. 7 in the Journal of Materials Chemistry.

Interestingly, the fluoride ion is the mirror opposite of the lithium ion, having the strongest attraction for electrons, which allows it to easily carry out electrochemical reactions. Researchers in Japan also are testing fluoride-ion batteries as possible replacements for lithium-ion batteries in vehicles. They say these batteries could allow electric vehicles to run 1,000 kilometers (621 miles) on a single charge. However, current fluoride-ion batteries have poor cyclability — that is, they tend to degrade rapidly with charge-discharge cycles.

Electrides are a relatively new class of materials that have been known in principle for about 50 years, but it wasn’t until the past 10 to 15 years that their properties were better understood, Mishra said. While these materials conduct electrons like ordinary metals, unlike the “sea of electrons” in metals where the electrons are delocalized throughout the crystal, in electrides, the electrons reside at specific interstitial sites within the crystal structure, similar to an ion.

“We predict that these interstitial electrons can be easily replaced with fluoride ions without significant deformations to the crystal structure, thus enabling cyclability,” Mishra said. “The fluoride ions can also move or diffuse fairly easily due to the relatively open structure of the layered electrides.”

Hartman, an Institute of Materials Science & Engineering alumnus who earned a doctorate in Mishra’s lab prior to accepting a postdoctoral fellowship at Los Alamos National Laboratory, used quantum-mechanical calculations to test dozens of potential battery candidates.

The computerized tests introduced fluoride into the interstitial spaces of the layered electrides dicalcium nitride and yttrium hypocarbide. Energy storage capabilities were close to the performance of lithium-ion batteries. In the case of dicalcium nitride, it is made up of relatively abundant elements and can help to overcome the supply shortage of elements currently used in lithium-ion batteries.

Hartman contrasted the battery study with some of the Mishra group’s other work, which uses machine learning “big data” techniques to sift through thousands of candidates.

“This took more intuition and trial-and-error than other studies we’ve done,” Hartman said. “In principle, you can add a lot of fluoride ions to conventional electrodes to store a lot of charge, but in practice, these theoretical capacities are hard to manage. When we add in fluoride to conventional electrodes, they swell and shrink dramatically as it charges and discharges, and that can lead to cracking and loss of electrical contact.”

Minimizing this volume and shape change is essential to create a durable fluoride battery.

“In these layered electride materials, we predict that adding and removing the fluoride ions would cause significantly smaller structural changes, thus helping achieve a longer cycling life,” Hartman said.

Mishra’s lab is looking to collaborate with researchers who can synthesize the promising electrides identified in this study and test them in prototype batteries.

Jason He, professor of energy, environmental & chemical engineering, recently conducted a feasibility study for electrochemical “refilling” of lithium-ion batteries into the spent electrodes to regenerate useful compounds, such as lithium cobalt oxide.

In addition, Vijay Ramani, the Roma B. & Raymond H. Wittcoff Distinguished University Professor, recently received $2 million from the Department of Energy’s Advanced Research Projects Agency-Energy to continue research into a battery concept that he pioneered for long-duration, grid-scale energy storage.