Study revealed that the electrical malfunctions and heart scarring seen in some of the sickest flu patients are caused by direct influenza infection of cardiac cells. 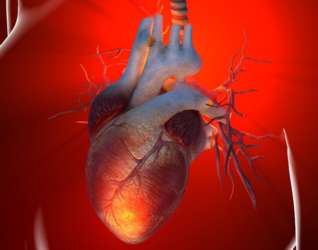 Researchers have shown for the first time in mice that heart problems associated with the flu are not caused by raging inflammation in the lungs, as has long been predicted.

Instead, the Ohio State University study revealed, the electrical malfunctions and heart scarring seen in some of the sickest flu patients are caused by direct influenza infection of cardiac cells.

The research team had seen flu viral particles in cardiac cells of infected mice in previous work, but couldn’t say for sure their presence in the heart was driving cardiac damage. When researchers infected mice with a genetically altered flu virus that wasn’t able to replicate in heart cells, the mice developed classic inflammatory flu symptoms – but no cardiac complications.

“We showed that even when you have a very severe infection in the lungs, if you’re using that virus that can’t replicate in the heart, you don’t get those cardiac complications,” said lead author Jacob Yount, associate professor of microbial infection and immunity in Ohio State’s College of Medicine.

“It proves it’s direct infection of the heart that’s driving these complications. Now we need to figure out what direct infection does: Is it killing heart cells? Does it have long-term ramifications? Do repeated infections have heart complications that build up over time? There are a lot of questions now for us to answer.”

The study is published on May 11, 2022, in the journal Science Advances.

It has been established for some time that hospitalized flu patients can develop heart problems. A 2020 study found that about 12% of adults in the U.S. hospitalized with the flu over eight years developed sudden, serious heart complications.

Yount has studied flu for years, and his lab developed a mouse model lacking IFITM3, the gene that codes for a key protein in the innate immune system’s clearance of viral infections. His team found in a 2019 study that flu-infected mice lacking the IFITM3 gene were at higher risk for developing cardiac issues.

These mice not only are highly susceptible to flu, but are also deficient in the same antiviral protein that some people are lacking, too: About 20% of Chinese people and 4% of Europeans have a genetic variant that causes a deficiency of IFITM3.

“We know those people are more susceptible to severe flu infections, and our mouse research would suggest they’re also more susceptible to heart complications with the flu,” said Yount, also a program co-director of the Viruses and Emerging Pathogens Program in Ohio State’s Infectious Diseases Institute.

For this study, the researchers altered the genome of an H1N1 flu strain so that the virus could not hijack heart cells to make copies of itself. They injected the altered virus and a control virus into normal mice and mice lacking IFITM3.

Both viruses caused lung and systemic inflammation and generated high concentrations of viral particles in the mice, but the altered virus was undetected in normal mouse heart cells and present in significantly lower concentrations in the IFITM3-deficient mouse hearts. These findings allowed for direct comparisons between the hearts of mice with and without robust virus replication.

“We have this mouse model and this virus that allowed us to distinguish between the severe lung inflammation and the direct replication of the virus in the heart. We hadn’t been able to separate those two things in the past,” Yount said. “If you don’t have the virus replicating strongly in the heart, you don’t see the same electrical abnormalities or the same fibrotic response.”

There is still a lot to learn. Influenza tends to focus most of its efforts on infiltrating the lungs, but generally isn’t present in the blood or other organs. But it does get to the heart – and finding out how this happens is part of continuing work in Yount’s lab.

It’s too soon to tell how this research might influence treatment of hospitalized flu patients with cardiac complications, but Yount said these findings suggest clearing the viral infection could be key to reducing flu’s problematic effects on the heart.

“One thing this tells us is that this is another reason to get your flu shot, because you don’t want your heart to get infected by the flu – and it is a possibility,” he said.