First record of a gall-forming aphid fighting off predator

A researcher reports evidence of a gall-forming aphid defending itself against predators, a first for the species, Mordwilkoja vagabunda. 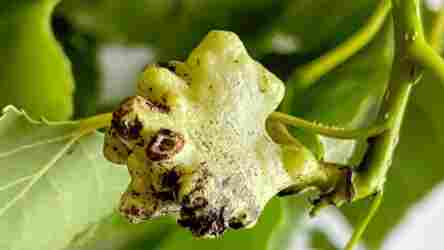 Saliva injected into leaf stalks by the aphids induces the plant to form small growths called galls that the aphids live inside.

A researcher reports evidence of a gall-forming aphid defending itself against predators, a first for the species, Mordwilkoja vagabunda. The insects inject saliva into leaf stalks, inducing the plant to form small growths called galls that the aphids live inside.

The aphids were recorded attacking their moth larvae predators, by clawing the larvae with their tarsi and using their syringe-like mouths to cut the predator’s cuticle. They were also observed twitching collectively in unison, a defensive behavior that has been documented in other aphid species.

“I’ve never personally seen this behavior where they collectively twitched; they sync up their movement in a regularly timed pulse, they all shake,” said Andrew Legan, a doctoral student in the lab of Michael Sheehan, a Nancy and Peter Meinig Family Investigator in the Life Sciences, and assistant professor of neurobiology and behavior in the College of Agriculture and Life Sciences.

Legan is the author of the paper, “First Record of Anti-Predator Behavior in the Gall-Forming Aphid, Mordwilkoja Vagabunda,” published May 18 in the journal Ecosphere.

Though it’s hard to confirm exactly why the aphids shake in unison, one theory is that aphids are generally defenseless, but if they collectively shake, they might trick a predator, such as a bird, into thinking they constitute a larger organism. Other theories suggest the movements may startle and dislodge a predator from the surface of the silver-dollar-sized gall, or make it fall into a crevasse inside the gall, or that they shake to test if an object is in fact a threat, by seeing if it moves after such twitching.

Legan also observed that when two aphids from the same gall encountered each other on its surface, they shook in synced intervals before they walked away from each other.

“My favorite hypothesis, but one that I haven’t tested, is that this is a recognition mechanism,” said Legan, whose dissertation-in-progress is on nest mate recognition in social wasps “If you sync, then you can stay, and if you don’t, then the aphid attacks.”

For the study, Legan collected aphid galls in Ithaca. The galls are started at the base of a leaf stalk by a single aphid, which excretes a substance that stimulates the plant to make a gall. The gall’s structure is made of plant cells but its shape is determined by the aphids genes. The female then clones herself, giving live birth to hundreds of aphid daughters. An entire colony lives inside the gall.

Once collected, Legan dissected the galls and observed them under a microscope. Since the galls can be very irregularly shaped, with pockets and folds, he emptied aphids onto a petri dish and then dropped a would-be predator among them. Predators can include ladybird beetles, moth larvae and even birds. For the study, Legan used pyralid moth larvae, a common predator. “It was pretty quickly mounted by the aphids,” to be clawed and cut, Legan said.

Legan believes that more study of these gall-forming aphids may help diversify how social behaviors are defined between species.

“There isn’t a lot of behavioral work being done on gall-forming aphids,” he said. “It’s a cool system for everyone to study, including students, because it’s not an expensive system to work with. Studying gall-forming aphid behavior is a great way to learn to use a dissecting microscope.”