First image of black hole at the center of our galaxy

The image was produced by an international research team, called the Event Horizon Telescope (EHT) Collaboration, consisting of more than 300 researchers from 80 institutions around the world. 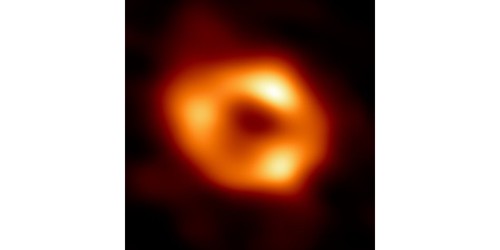 This is the first-ever image of Sagittarius A* (or Sgr A* for short), the supermassive black hole at the center of our Milky Way galaxy. It is the first direct visual evidence of the presence of this black hole and was captured by the Event Horizon Telescope (EHT), an array that linked together eight radio observatories across the planet to form a single "Earth-sized" virtual telescope. The telescope is named after the "event horizon," the boundary of the black hole beyond which no light can escape. Although we cannot see the event horizon itself, glowing gas orbiting around the black hole reveals a telltale signature: a dark central region, called a "shadow," surrounded by a bright ring-like structure. The new view captures light bent by the powerful gravity of the black hole, which is four million times more massive than our sun. The image of the Sgr A* black hole is an average of different images extracted from the EHT's 2017 observations.Credit: EHT Collaboration

A multi-institution collaboration that includes a Caltech-led imaging team has generated the first image of the supermassive black hole at the center of the Milky Way galaxy.

This result provides conclusive evidence that the body, known as Sagittarius A* (Sgr A*, pronounced "sadge-ay-star"), is indeed a black hole and yields valuable clues about the workings of such massive objects, which are thought to reside at the center of most galaxies.

The Sgr A* image was produced by an international research team, called the Event Horizon Telescope (EHT) Collaboration, consisting of more than 300 researchers from 80 institutions around the world. The result includes key contributions from an imaging team led by Caltech's Katherine L. (Katie) Bouman together with Kazunori Akiyama of MIT Haystack Observatory and José L. Gómez of Instituto de Astrofísica de Andalucía in Spain.

So far, the most convincing evidence that Sgr A* is a supermassive black hole has been provided by Caltech alumna Andrea Ghez (MS '89, PhD '92) of the University of California, Los Angeles, and Reinhard Genzel of the Max Planck Institute for Extraterrestrial Physics in Germany and University of California, Berkeley, whose work revealed that Sgr A* is a compact object that has a mass nearly four million times that of the sun. The discovery earned Ghez and Genzel—together with Roger Penrose of the University of Oxford for related advances in the understanding of black holes—the 2020 Nobel Prize in Physics.

The new EHT image of Sgr A* shows that the 4 million solar masses are constrained within a diameter smaller than Mercury's orbit, providing clearer evidence that the object is indeed a black hole.

This is the second-ever image taken of a black hole; in 2019, the EHT collaboration released an image of a black hole named M87*, at the center of the more distant Messier 87 galaxy.

Taking an image of Sgr A* at 27,000 light-years away from Earth is akin to taking a photo of a single grain of salt in New York City using a camera in Los Angeles. Taking an image of an object that appears that small requires an Earth-sized telescope—or data from many telescopes tiled evenly across the entire Earth. Since the EHT was not able to accomplish this impossible feat, it instead collected data from eight radio observatories scattered across the globe to form a single "Earth-sized" virtual telescope.

"This image from the Event Horizon Telescope required more than just snapping a picture from telescopes on high mountaintops. It is the product of both technically challenging telescope observations and innovative computational algorithms," Bouman said at a press conference announcing the new image. "Taking this picture of our black hole proved even more challenging than imaging the M87 black hole." While working on the M87 image, Bouman joined Caltech's faculty. She arrived on campus in 2019, shortly after the image's publication.

Although we cannot see the black hole itself because it is completely dark, we can see a telltale ring of glowing gas surrounding a dark central region called a "shadow." The size of the shadow observed, which theory says depends primarily on the black hole mass, precisely matched the mass estimated by prior observations. The new view captures light bent by the powerful gravity of the black hole, which is four million times more massive than our sun.

The team collected entire nights' worth of data over the course of multiple days -- a bit like a traditional camera with a long exposure time. Members of the EHT went to the ends of the earth, literally, to collect these measurements; Caltech's Kim, for example, helped prepare a telescope near the South Pole to observe with the EHT.

Because the data came from only a small number of telescopes peering at an object far away, the EHT team was left with incomplete data to use to construct the image of Sgr A*. That sparse and noisy data creates uncertainty, meaning that more than one image that could explain the data EHT gathered. And to make imaging the black hole even more challenging, Sgr A* is far more dynamic than M87*, with a bright ring of swirling gases that changes on a minute-by-minute basis. "With EHT, we're using telescopes scattered across the globe, each capturing data from the target at various points during the night as the earth rotates," Levis says. "When the target we are observing changes during that time—as it did for Sgr A*—it makes the problem much more complicated."

To reconstruct an image, the EHT team developed computational imaging algorithms capable of making inferences to fill in the blanks in the data that had been gathered. The team discovered that multiple ring geometries could explain the Sgr A* data, as well as some geometries that do not look ring-like at all. To better understand how the imaging algorithms worked on data from an evolving target, Levis built a synthetic model of variable structure (akin to water swirling around a drain) that was based on statistics taken from the real data about Sgr A* that EHT had gathered. The model was then used to exhaustively test EHT's imaging methods and identify the best settings to recover an accurate image.

"Through literally years of exhaustive tests on both real and synthetic data we are now confident that there is compelling evidence that the true underlying source has a ring structure," Bouman says.

Although non-ring geometries cannot be fully discarded, the statistical analysis performed by the team suggests that they are very unlikely -- the EHT results provide compelling evidence that the Sgr A* image is dominated by a bright emission ring about 50 microarcseconds in diameter, Bouman says.

After determining that Sgr A*'s image geometry is likely a ring, the EHT used a number of cutting-edge tools to estimate the uncertainty in the recovered structure. Former postdoc Sun, now starting a faculty position at Peking University, used a deep-learning method developed at Caltech to analyze the data and quantify various aspects of the black hole, including its diameter and the amount of asymmetry in the ring of bright gas surrounding it.

"We not only recovered an image of Sgr A*, but also characterized the uncertainty of features in the image," says Sun. "This analysis helped the team deliver scientific results with some guarantees."

In October, EHT member Antonio Fuentes, currently at Instituto de Astrofísica de Andalucía-CSIC in Spain, will join Caltech as a postdoctoral researcher. Fuentes and Bouman are currently developing methods that will allow them to piece together snapshots of Sgr A* to form a movie by imposing frame-to-frame continuity.

That work has already begun to yield results: By running these methods on 100-minute chunks of the Sgr A* data from April 6 and 7 of 2017, the researchers were able to create a number of different movies that could possibly fit the observed data. This analysis revealed that, although Sgr A* appeared fairly static on April 6 during these 100 minutes, during the same time period on April 7 it showed possible signs of significant evolution. However, while the EHT data shows detectable signs of image variability, the current data does not reliably constrain the underlying image evolution.

"This analysis provides a promising starting point for future studies of evolution seen in Sgr A* EHT observations when we have the opportunity to observe with more telescopes," Bouman says.