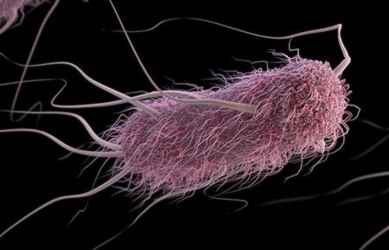 An artist's depiction of a bacterial cellCredit: Centers for Disease Control and Prevention/James Arche

Since its invention, chemotherapy has proven to be a valuable tool in treating cancers of many kinds, but it has a big downside. In addition to killing cancer cells, it can also kill healthy cells like the ones in hair follicles, causing baldness, and those that line the stomach, causing nausea.

Scientists at Caltech may have a better solution: genetically engineered, sound-controlled bacteria that seek and destroy cancer cells. In a new paper appearing in the journal Nature Communications, researchers from the lab of Mikhail Shapiro, professor of chemical engineering and Howard Hughes Medical Institute investigator, show how they have developed a specialized strain of the bacteria Escherichia coli (E. coli) that seeks out and infiltrates cancerous tumors when injected into a patient's body. Once the bacteria have arrived at their destination, they can be triggered to produce anti-cancer drugs with pulses of ultrasound.

"The goal of this technology is to take advantage of the ability of engineered probiotics to infiltrate tumors, while using ultrasound to activate them to release potent drugs inside the tumor," Shapiro says.

The starting point for their work was a strain of E. coli called Nissle 1917, which is approved for medical uses in humans. After being injected into the bloodstream, these bacteria spread throughout the body. The patient's immune system then destroys them—except for those bacteria that have colonized cancerous tumors, which offer an immunosuppressed environment.

To turn the bacteria into a useful tool for treating cancer, the team engineered them to contain two new sets of genes. One set of genes is for producing nanobodies, which are therapeutic proteins that turn off the signals a tumor uses to prevent an anti-tumor response by the immune system. The presence of these nanobodies allow the immune system to attack the tumor. The other set of genes act like a thermal switch for turning the nanobody genes on when the bacteria reaches a specific temperature.

By inserting the temperature-dependent and nanobody genes, the team was able to create strains of bacteria that only produced the tumor-suppressing nanobodies when warmed to a trigger temperature of 42–43 degrees Celsius. Since normal human body temperature is 37 degrees Celsius, these strains do not begin producing their anti-tumor nanobodies when injected into a person. Instead, they quietly grow inside the tumors until an outside source heats them to their trigger temperature.

But how do you heat bacteria that are located in one specific location, potentially deep inside the body where a tumor is growing? For this, the team used focused ultrasound (FUS). FUS is similar to the ultrasound used for imaging internal organs, or a fetus growing in the womb, but has higher intensity and is focused into a tight point. Focusing the ultrasound on one spot causes the tissue in that location to heat up, but not the tissue surrounding it; by controlling the intensity of the ultrasound, the researchers were able to raise the temperature of that tissue to a specific degree.

"Focused ultrasound allowed us to activate the therapy specifically inside a tumor," says Mohamad Abedi (PhD '21), a former PhD student in Shapiro's group who co-led the project and is now a postdoctoral fellow at the University of Washington. "This is important because these potent drugs, which are so helpful in tumor treatment, can cause significant side effects in other organs where our bacterial agents may also be present."

To test whether their engineered strain of bacteria worked as intended, the research team injected bacterial cells into lab mice afflicted with tumors. After giving the bacteria time to infiltrate the tumors, the team used ultrasound to warm them.

However, the team also found that some of the tumors in treated mice did not shrink at all.

"This is a very promising result because it shows that we can target the right therapy to the right place at the right time," Shapiro says. "But as with any new technology there are a few things to optimize, including adding the ability to visualize the bacterial agents with ultrasound before we activate them and targeting the heating stimuli to them more precisely."