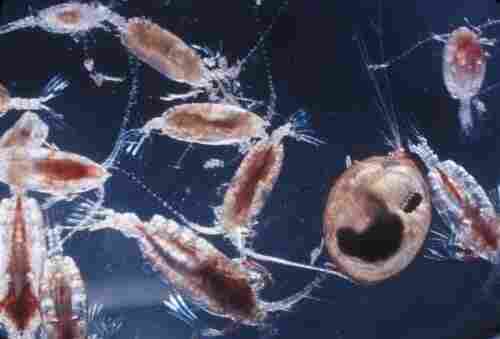 Several species of copepods and one ostracod are shown here. NOAA Photo Library

Some copepods, diminutive crustaceans with an outsized place in the aquatic food web, can evolve fast enough to survive in the face of rapid climate change, according to new research that addresses a longstanding question in the field of genetics.

Barely more than a millimeter long, the copepod Eurytemora affinis paddles its way through the coastal waters of oceans and estuaries around the world in large numbers — mostly getting eaten by juvenile fish, like salmon, herring and anchovy.

“This is a dominant coastal species, serving as very abundant and highly nutritious fish food,” says Carol Eunmi Lee, professor in the University of Wisconsin–Madison’s Department of Integrative Biology and senior author of a new study on the copepods published in the journal Nature Communications. “But they’re vulnerable to climate change.”

Ocean salinity, Lee explains, is changing rapidly as ice melts and precipitation patterns change: “These copepods are a saltwater species that now needs to adapt to much fresher water in their environment.”

Many copepods (and innumerable other animals) evolved in salty water. As their environment changes, they will have to adjust to maintain their body chemistry … or die off.

“Salinity is a very strong environmental pressure in aquatic habitats,” says David Stern, lead author of the study and a former postdoctoral researcher in Lee’s lab, now working at the National Biodefense Analysis and Countermeasures Center.

Lee, Stern and the rest of the research team studied how some copepods responded to that pressure. They kept a population of Eurytemora affinis from the Baltic Sea in their lab — the small crustaceans swimming in water just as salty as their home range and reproducing through several generations.

The researchers then split the copepods into 14 groups of a few thousand each. Four control groups lived out the experiment in the environment like the Baltic. The other 10 groups were exposed to declining salt levels, mimicking the sort of pressure caused by climate change. Each had their water reduced to lower salinity at each new generation (about three weeks for this copepod) for a total of ten generations.

The researchers next sequenced the genomes of each line of copepods at the beginning of their experiment and again after six generations and 10 generations, tracking evolutionary changes across their genomes. The strongest signals of natural selection — where changes were largest and most common across the groups stressed by falling salinity — were at parts of the genome believed to be important in regulating ions, such as sodium transporters.

“In saltwater, there are a lot of ions, like sodium, that are essential for survival. But when you get to freshwater, these ions are precious,” says Lee. “So, the copepods need to suck them up from the environment and hang on to them, and the ability to do that relies on these ion transporters that we found undergoing natural selection.”

At the end of the experiment, the researchers found that copepods with certain genetic combinations of the ion transporter were, repeatedly, more likely to survive through successive generations, even as the salinity of their water decreased. In fact, the same gene variants, or alleles, found in the copepods that survived the salinity decline in the laboratory are also common in the fresher regions of the Baltic Sea.

“With the number of genes we have encoding the traits in our copepods, there’s no way we would see the amount of parallelism we did unless something was driving it,” says Stern.

The evolution experiment is new evidence of a genetic mechanism called positive epistasis, in which the positive effect of a variant of a gene is amplified when working in combination with other key genes. It’s a theory that legendary UW–Madison genetics professor Sewall Wright and others championed nearly a century ago in counterpoint to additive evolution, the idea that the effect of each single gene carries the same weight, and the effects of many genes add up in a linear fashion.

“Computer simulations of evolution in our experimental conditions predict that additive evolution would have given us much greater variation among our 10 lines,” adds Stern. “We didn’t see that kind of variation.”

Epistasis had gone largely untested for lack of experimental tools, but the large amounts of genomic data from modern sequencing and computing simulations made it possible to show positive epistasis at work in parallel evolution and to describe the power of genetics for studying climate change. Stern, Lee and colleagues show in the new study that positive epistasis can drive the parallel evolution of groups of animals by favoring sets of alleles repeatedly through natural selection.

“This copepod gives us an idea of what it takes, an idea of what the conditions are needed, that enable a population to evolve rapidly in response to climate change,” says Lee. “It also shows how important evolution is for understanding our changing planet and how — or even whether — populations and ecosystems will survive.”