A new study shows how SARS-CoV-2, the virus that causes COVID-19, and SARS-CoV-1, which caused the 2003 SARS outbreak, are related to each other 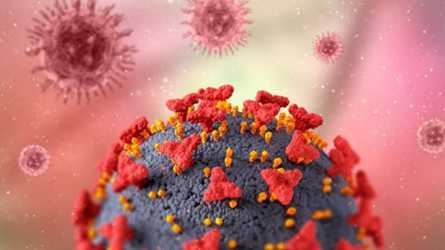 A new study shows how SARS-CoV-2, the virus that causes COVID-19, and SARS-CoV-1, which caused the 2003 SARS outbreak, are related to each other. The work, published in the journal Virus Evolution, helps scientists better understand the evolution of these viruses, how they acquired the ability to infect humans and which other viruses may be poised for human spillover. “How did these viruses come to be what they are today? Why do some of them have the ability to infect humans while others do not?” said Simon Anthony, associate professor of pathology, microbiology and immunology in the School of Veterinary Medicine at the University of California, Davis, and senior author on the paper.

Both SARS-CoV-1 and SARS-CoV-2 belong to a group called the sarbecoviruses, but they are quite different from each other. Scientists have divided the sarbecoviruses into five lineages, with SARS-CoV-1 belonging to lineage 1 and SARS-CoV-2 to lineage 5.  Even though these two viruses belong to different lineages they both get into human cells using the ACE2 receptor. “That is striking,” Anthony said, “because there are other viruses more closely related to SARS-CoV-1 that do not use ACE2. So how did SARS-CoV-1 end up having similarities to a virus that is more distantly related?”

Anthony and Heather Wells, a graduate student at Columbia University, constructed a family tree of all the SARS-like viruses. They found that lineage 5 - which contains SARS-CoV-2 - is the ancestral lineage. They concluded that most of the lineage 1 viruses related to SARS-CoV-1 lost the ability to use human ACE2 receptors long ago because of deletions in their genome. But SARS-CoV-1 and a few other viruses regained the ability to use human ACE2 at some point. That probably occurred through a process called recombination, Wells said. For that to happen, two different viruses must have infected the same animal at the same time, producing a hybrid virus with the ability to infect humans through ACE2.

The family tree also gives insight into the geographic origins of these viruses, Wells said. So far, all ACE2-using viruses have been detected in Yunnan province, implying that SARS-CoV-2 did not originate in Wuhan, where the first cases of COVID-19 were reported, but elsewhere in China. This study provides evolutionary context for why these viruses behave as they do. It allows researchers to place newly discovered viruses within the family tree and estimate whether they have the potential to infect humans.