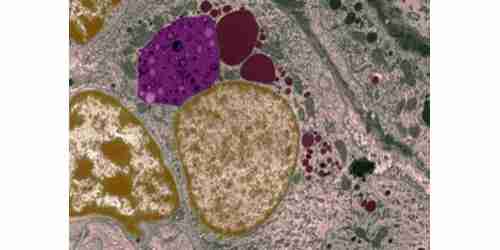 Previous research has shown that the enzyme TPL-2 plays an important role in the body’s immune response to pathogen infection, controlling the production of cytokines, messenger molecules that regulate the function of key cells of the immune system. Now, Imperial-led research published in The EMBO Journal indicates that TPL-2 also controls the killing of harmful foreign microbes, ingested via a process called phagocytosis, by macrophages. TPL-2 helps to ‘mature’ cellular structures known as phagosomes which form around ingested microbes. As phagosomes mature, they become more acidic which helps break down and kill these microbes. The current study explores how TPL-2 helps to kill Staphylococcus aureus – a type of bacteria that, although normally harmless, can cause a range of illnesses ranging from minor skin infections to pneumonia and sepsis.

These observations could assist researchers in finding new ways to re-engineer innate immune responses to bacteria. The study team will further explore TPL-2’s role in phagocytosis following infection with different types of disease-causing bacteria. Lead author Professor Steve Ley, based at Imperial’s Department of Immunology and Inflammation, commented: “This research increases our understanding of a critical process in innate immune responses.” “In future research, this may lead to novel ways to manipulate the innate immune response to bacteria. TPL-2 is genetically linked to the development of inflammatory bowel disease and our new findings also raise the possibility that TPL-2 regulation of phagocytosis is important in this chronic inflammatory condition.”