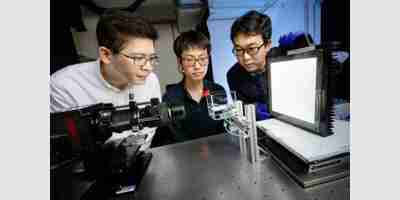 Bubbles are common in nature and can form when ocean waves break and when raindrops impact surfaces. When bubbles burst, they send tiny jets of water and other materials into the air. A new study from the University of Illinois Urbana-Champaign examines how the interplay between bubble surfaces and water that contains organic materials contributes to the transport of aerosolized organic materials – some of which are linked to the spread of disease or contamination – into the atmosphere.

The study, led by mechanical science and engineering professor Jie Feng with postdoctoral researcher Bingqiang Ji and graduate student Zhengyu Yang, demonstrates a distinct transport mechanism occurring at the interface of bursting bubbles and the air. The study results are published in the journal Nature Communications.

“We are all familiar with how we can smell beer when it is placed in front of us,” Feng said. “The bursting bubbles in the foam send droplets of aerosolized liquid into the air. We then inhale those tiny droplets, activating our smell senses – this is the phenomenon we are examining in this study.”

Sometimes the surfaces of liquids are enriched with organic substances like microlayers of oil on the ocean or microorganisms on the surface of fluids in the reaction tanks of municipal wastewater treatment plants, the researchers said.

“Our goal was to identify what in the bubble-bursting processes leads to the release of organic substances into the air, and what controls the amount of material that is released,” Ji said.

To mimic the bubble-bursting process in a controlled manner, the team experimented by releasing single bubbles – whose sizes were controlled using a syringe pump and needles – up through a column of water topped with a layer of silicone oils of known viscosity and varied thickness.

“We observed that the bubble sits just below the oil momentarily, then bursts,” Yang said. “We capture this process using high-speed photography so that we can examine the dynamics of that bubble burst in slow motion.”

“We also found that the viscosity and the thickness of the oil control the shape, size and velocity of the resulting bursting jet, which has implications for how much oil is ejected from bursting jets,” Feng said. “Remarkably, we found that the oily jet is thinner and travels faster with increasing oil viscosity and oil layer thickness, which is not something that we expected. In addition, we found that the tiny drop can contain up to 80% in volume fraction regarding the organic substance, which may play an important role in dispersing the contaminants.”

Feng said this work will help refine models used to predict how contaminants travel through the environment in the event of disasters like oil and other contaminant spills in water. The findings also will help determine the specifications for personal protective equipment for people who work around organic aerosol hazards and allow climate scientists to refine the contaminant data used in climate modeling.

“We hope our next step will be to collaborate with biologists to see how this understanding of aerosol formation through natural bubbles translates to a more practical system, maybe using viruses and other microbes,” Feng said. “I think working with real biological materials that could pose real-life risks will show the true impact of this type of research."

Feng also is associated with the Materials Science Laboratory at Illinois.