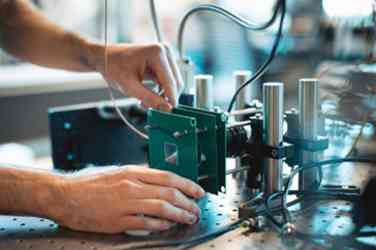 Standard image sensors, like the billion or so already installed in practically every smartphone in use today, capture light intensity and color. Relying on common, off-the-shelf sensor technology – known as CMOS – these cameras have grown smaller and more powerful by the year and now offer tens-of-megapixels resolution. But they’ve still seen in only two dimensions, capturing images that are flat, like a drawing – until now.

Researchers at Stanford University have created a new approach that allows standard image sensors to see light in three dimensions. That is, these common cameras could soon be used to measure the distance to objects.

The engineering possibilities are dramatic. Measuring distance between objects with light is currently possible only with specialized and expensive lidar – short for “light detection and ranging” – systems. If you’ve seen a self-driving car tooling around, you can spot it right off by the hunchback of technology mounted to the roof. Most of that gear is the car’s lidar crash-avoidance system, which uses lasers to determine distances between objects.

Lidar is like radar, but with light instead of radio waves. By beaming a laser at objects and measuring the light that bounces back, it can tell how far away an object is, how fast it’s traveling, whether it’s moving closer or farther away and, most critically, it can calculate whether the paths of two moving objects will intersect at some point in the future.

“Existing lidar systems are big and bulky, but someday, if you want lidar capabilities in millions of autonomous drones or in lightweight robotic vehicles, you’re going to want them to be very small, very energy efficient, and offering high performance,” explains Okan Atalar, a doctoral candidate in electrical engineering at Stanford and the first author on the new paper in the journal Nature Communications that introduces this compact, energy-efficient device that can be used for lidar.

For engineers, the advance offers two intriguing opportunities. First, it could enable megapixel-resolution lidar – a threshold not possible today. Higher resolution would allow lidar to identify targets at greater range. An autonomous car, for example, might be able to distinguish a cyclist from a pedestrian from farther away – sooner, that is – and allow the car to more easily avoid an accident. Second, any image sensor available today, including the billions in smartphones now, could capture rich 3D images with minimal hardware additions.

One approach to adding 3D imaging to standard sensors is achieved by adding a light source (easily done) and a modulator (not so easily done) that turns the light on and off very quickly, millions of times every second. In measuring the variations in the light, engineers can calculate distance. Existing modulators can do it, too, but they require relatively large amounts of power. So large, in fact, that it makes them entirely impractical for everyday use.

The solution that the Stanford team, a collaboration between the Laboratory for Integrated Nano-Quantum Systems (LINQS) and ArbabianLab, came up with relies on a phenomenon known as acoustic resonance. The team built a simple acoustic modulator using a thin wafer of lithium niobate – a transparent crystal that is highly desirable for its electrical, acoustic and optical properties – coated with two transparent electrodes.

Critically, lithium niobate is piezoelectric. That is, when electricity is introduced through the electrodes, the crystal lattice at the heart of its atomic structure changes shape. It vibrates at very high, very predictable and very controllable frequencies. And, when it vibrates, lithium niobate strongly modulates light – with the addition of a couple polarizers, this new modulator effectively turns light on and off several million times a second.

In technical terms, the piezoelectric effect is creating an acoustic wave through the crystal that rotates the polarization of light in desirable, tunable and usable ways. It is this key technical departure that enabled the team’s success. Then a polarizing filter is carefully placed after the modulator that converts this rotation into intensity modulation – making the light brighter and darker – effectively turning the light on and off millions of times a second.

“While there are other ways to turn the light on and off,” Atalar says, “this acoustic approach is preferable because it is extremely energy efficient.”

Best of all, the modulator’s design is simple and integrates into a proposed system that uses off-the-shelf cameras, like those found in everyday cellphones and digital SLRs. Atalar and advisor Amin Arbabian, associate professor of electrical engineering and the project’s senior author, think it could become the basis for a new type of compact, low-cost, energy-efficient lidar – “standard CMOS lidar,” as they call it – that could find its way into drones, extraterrestrial rovers and other applications.

The impact for the proposed modulator is enormous; it has the potential to add the missing 3D dimension to any image sensor, they say. To prove it, the team built a prototype lidar system on a lab bench that used a commercially available digital camera as a receptor. The authors report that their prototype captured megapixel-resolution depth maps, while requiring small amounts of power to operate the optical modulator.

Better yet, with additional refinements, Atalar says the team has since further reduced the energy consumption by at least 10 times the already-low threshold reported in the paper, and they believe several-hundred-times-greater energy reduction is within reach. If that happens, a future of small-scale lidar with standard image sensors – and 3D smartphone cameras – could become a reality.