Engineers develop a thin, flexible strip that can be worn on a fingertip and generate small amounts of electricity 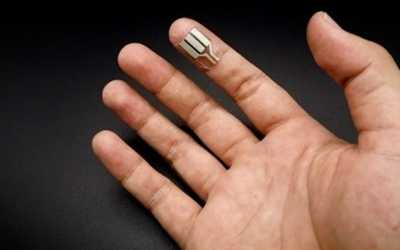 Engineers at the University of California San Diego developed a thin, flexible strip that can be worn on a fingertip and generate small amounts of electricity when a person’s finger sweats or presses on it. This type of device is the first of its kind, said co-first author Lu Yin, a nanoengineering Ph.D. student at the UC San Diego Jacobs School of Engineering. “Unlike other sweat-powered wearables, this one requires no exercise, no physical input from the wearer in order to be useful. This work is a step forward to making wearables more practical, convenient and accessible for the everyday person.” The new wearable energy harvester is described in a paper published in the journal Joule. The device also generates extra power from light finger presses - so activities such as typing, texting, playing the piano or tapping in Morse code can also become sources of energy.

The device derives most of its power from sweat produced by the fingertips, which are 24-hour factories of perspiration. It’s a little-known fact that the fingertips are one of the sweatiest spots on the body; each one is packed with over a thousand sweat glands and can produce between 100 to 1000 times more sweat than most other areas on the body. “The fingertips are always exposed to air, so the sweat evaporates as it comes out. So rather than letting it evaporate, we use our device to collect this sweat, and it can generate a significant amount of energy” said Yin.

This latest energy harvesting technology is especially unique in that it could serve as a power source anytime, anywhere. It does not have the same limitations as, say, solar cells, which only work under sunlight, or thermoelectric generators, which only work when there’s a large temperature difference between the device and the surroundings. The device is a thin, flexible strip that can be wrapped around the fingertip like a Band-Aid. A padding of carbon foam electrodes absorbs sweat and converts it into electrical energy. The electrodes are equipped with enzymes that trigger chemical reactions between lactate and oxygen molecules in sweat to generate electricity. Underneath the electrodes is a chip made of what’s called a piezoelectric material, which generates additional electrical energy when pressed. As the wearer sweats or presses on the strip, the electrical energy gets stored in a small capacitor and is discharged to other devices when needed.