The urea electrolysis is helpful towards urea-based waste treatment with low-cost hydrogen production. 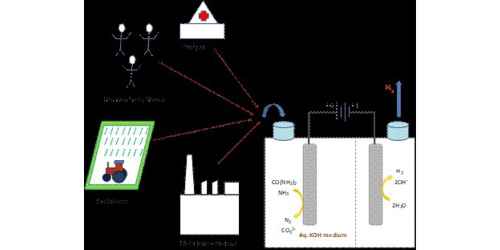 The energy requirement for production of hydrogen through water electrolysis can be reduced by 70 % through urea electrolysis. The energy-intensive counterpart of water splitting, oxygen evolution, can be replaced with urea oxidation in urea electrolysis. The low-cost, earth-abundant Ni-based catalysts are widely applied for this process. The main challenge associated with urea oxidation is retaining the prolonged activity of the catalyst as the strong adsorption of the reactive intermediate (COx) on the active site, referred to as catalyst poisoning, causes activity loss.

Towards this end, Mr. Alex C, Mr. Gaurav Shukla, Mr. Muhammed Safeer N. K., and Dr. Neena S John from the Centre for Nano and Soft Matter Sciences (CeNS), an autonomous institute of the Department of Science & Technology, Govt. of India have developed this Nickel oxide (NiOx) based system for producing hydrogen from electro-oxidation of urea.

In the series of research works published in the journals ‘Electrochimica Acta’ and ‘Journal of Materials Chemistry A, the scientists have explored electrocatalysts and shown that surface defective NiO and Ni2O3 systems having more Ni3+ ions are more efficient electrocatalysts than conventional NiO. They have used high-energy electron beams to produce surface defective unsaturated Ni sites in NiO (e-NiO). The study reveals that e-NiO prefers direct mechanism of urea electro-oxidation due to strong adsorption of urea molecule, whereas NiO favors indirect mechanism with low activity. Further, the prominent electrocatalyst poison COx could be removed by adjusting the molar ratio of KOH and Urea with improved kinetics.

The researchers, Alex and Gaurav, are of the opinion that the e-beam treatment is an effective way to produce a large number of coordinatively unsaturated active sites on electrocatalysts. It was observed that these generated sites effectively adsorb urea and favors direct urea electro-oxidation mechanism (UOR). The researcher, Safeer, continued the studies on another Ni3+ oxide system (Ni2O3), revealing that active species Ni3+O(OH) on Ni2O3 possess high COx tolerance than NiO. The active species of high valent Ni oxide system has a profound effect on catalyst activity.

The urea electrolysis is helpful towards urea-based waste treatment with low-cost hydrogen production. India is one of the top countries by urea production, and it produced 244.55 LMT of urea during 2019-20. The nitrogenous fertilizer industries generate a high concentration of ammonia and urea as effluents. This can be utilized for energy production towards our country's benefits.