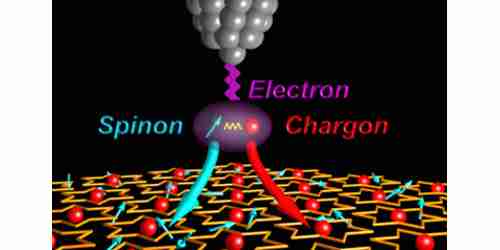 Scientists have taken the clearest picture yet of electronic particles that make up a mysterious magnetic state called a quantum spin liquid (QSL). The achievement could facilitate the development of superfast quantum computers and energy-efficient superconductors. The scientists are the first to capture an image of how electrons in a QSL decompose into spin-like particles called spinons and charge-like particles called chargons. “Other studies have seen various footprints of this phenomenon, but we have an actual picture of the state in which the spinon lives. This is something new,” said study leader Mike Crommie, a senior faculty scientist at Lawrence Berkeley National Laboratory (Berkeley Lab) and physics professor at UC. “Spinons are like ghost particles. They are like the Big Foot of quantum physics – people say that they’ve seen them, but it’s hard to prove that they exist,” said co-author Sung-Kwan Mo. “With our method we’ve provided some of the best evidence to date.” In a QSL, spinons freely move about carrying heat and spin – but no electrical charge. To detect them, most researchers have relied on techniques that look for their heat signatures.

Now, as reported in the journal Nature Physics, Crommie, Mo, and their research teams have demonstrated how to characterize spinons in QSLs by directly imaging how they are distributed in a material.

To begin the study, Mo’s group at Berkeley Lab’s Advanced Light Source (ALS) grew single-layer samples of tantalum diselenide (1T-TaSe2) that are only three-atoms thick. This material is part of a class of materials called transition metal dichalcogenides (TMDCs). The researchers in Mo’s team are experts in molecular beam epitaxy, a technique for synthesizing atomically thin TMDC crystals from their constituent elements. Mo’s team then characterized the thin films through angle-resolved photoemission spectroscopy, a technique that uses X-rays generated at the ALS. Using scanning tunneling microscopy (STM), researchers in the Crommie lab injected electrons from a metal needle into the tantalum diselenide TMDC sample. Images gathered by scanning tunneling spectroscopy (STS) – an imaging technique that measures how particles arrange themselves at a particular energy – revealed something quite unexpected: a layer of mysterious waves having wavelengths larger than one nanometer (1 billionth of a meter) blanketing the material’s surface. In the current study, STM/STS images show that the chargons freeze in place, forming what scientists call a star-of-David charge-density-wave. Meanwhile, the spinons undergo an “out-of-body experience” as they separate from the immobilized chargons and move freely through the material, Crommie said.