Eight years later, an explosion far out in space is still revealing secrets about the lives of stars

A team of astronomers has uncovered new clues about a mysterious stellar explosion that was discovered eight years ago but is continuing to evolve even as scientists watch. 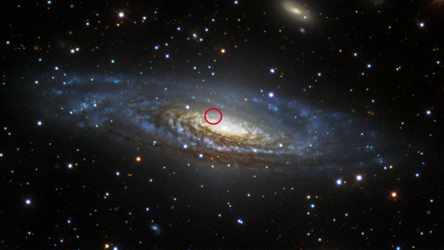 An international group of astronomers has uncovered new clues about a mysterious stellar explosion that was discovered eight years ago but is continuing to evolve even as scientists watch.

The results help astronomers better understand the process of how massive stars—giants far larger than our own sun—live and die.

In 2014, astronomers saw a sudden bright spot in the sky—a sure sign that a star had exploded out in space.

When an exploding star is first detected, astronomers around the world begin to follow it with telescopes as the light it gives off changes rapidly over time. By watching how it evolves, using telescopes that can see visible light and also X-rays, radio waves, and infrared light, scientists can deduce the physical characteristics of the system.

By doing this many times, scientists have grouped these exploding stars into categories. 2014C, as this particular event was named, looked like what’s called a Type Ib supernova. They are what happen when the largest known stars in the universe die.

In fact, scientists think 2014C was probably originally not one but two stars orbiting each other, one bigger than the other. The more massive star evolved more quickly, expanded, and its outer layer of hydrogen got sucked away. When it eventually ran out of fuel, its core collapsed, triggering a gigantic explosion.

However, observations in the first 500 days after the explosion had shown that it was emitting more X-rays over time, which was unusual and seen only in a small number of supernovae. “It suggested that the shockwave was interacting with dense material,” said Vikram Dwarkadas, University of Chicago research professor of astronomy and astrophysics.

The group set out to collect all of the data on 2014C, including new data they obtained as well as from studies over the past eight years, and to fit it into a cohesive picture of what happened to the star.

The X-ray emissions, infrared light, and radio waves all showed the distinctive pattern of increasing and then decreasing. Meanwhile, the optical light—measured by UT Austin’s Hobby-Eberly Telescope—appeared to stay steady. The radio signal showed that the shockwave was expanding at a very high speed, whereas the optical light indicated a much slower speed.

The researchers suggested that the odd behavior had to do with a dense cloud of hydrogen around the two stars that was left over from earlier in their lifetimes.

When the star exploded, it produced a shockwave traveling at something like 67 million miles per hour in all directions. As the shockwave reached this cloud, its behavior would be affected by how the cloud was shaped.

In the simplest model, this cloud would be assumed to be spherical and symmetrical. However, if the cloud had formed a “donut” around the two stars—that is, thicker around the middle—the thicker part of the ring would slow down the shockwave, showing up in the optical light as slower-moving material. Meanwhile, in the thinner areas, the shockwave would rush forward, as seen in the radio waves. “Think of the water hitting a rock in the center of the river,” Dwarkadas said.

Questions remain, the scientists said, but this unevenness could account for the different speeds of the shockwave indicated by the different wavelengths.

The study provided valuable clues as to the evolution of these stars and mass lost from these systems, and in a larger sense to the lives and deaths of these relatively mysterious stars, the scientists said.

“In a broad sense, the question of how massive stars lose their mass is the big scientific question we were pursuing,” said UT Austin professor and team member J. Craig Wheeler. “How much mass? Where is it? When was it ejected? By what physical process? Those were the macro questions we were going after.

“And 2014C just turned out to be a really important single event that’s illustrating the process.”