The study explores the effects of feast and famine cycles within groups of the intestine-dwelling bacteria E. coli 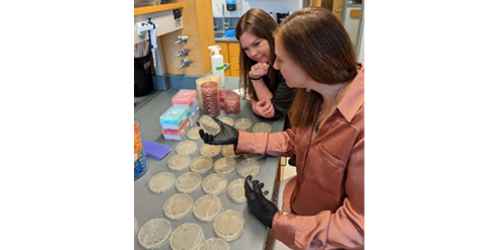 Bacteria, not unlike humans, can take up more resources than necessary. When this happens, synthesized byproducts can leak into the environment, which allows other nearby bacteria to evolve cooperative behaviors—such as using the byproducts as nutrients. Cooperation in bacterial communities has also been observed to facilitate behaviors like altering the environment or forming new structures like biofilms.

“Making your own resources costs energy. Bacteria can evolve to rely on each other—and also conserve energy—through mutations that result in the loss of certain metabolic processes that can be supplemented by using these now public goods,” said Megan Behringer, an assistant professor in biological sciences.

Behringer, also a member of the Evolutionary Studies Initiative, published the study, “Complex Ecotype Dynamics Evolve in Response to Fluctuating Resources” in the journal mBio on May 16. The study explores the effects of feast and famine cycles within groups of the intestine-dwelling bacteria E. coli. The work was a collaborative effort between the Behringer lab and Wei-Chin Ho, a postdoctoral researcher at Arizona State University.

Behringer and Ho set out to test this cooperation in E. coli under feast and famine conditions. They set up the bacteria with a broth medium to grow in. After 10 days, the bacteria were transferred to new broth medium. The bacteria used up most of the resources within the new broth after about one day.

“E. coli grow very quickly and can exhaust their preferred nutrients within a day, so if we are transferring the cells every 10 days like in this experiment, they will spend the next nine days scavenging for nutrients—including cannibalizing other E. coli that don’t survive the harsh, nutrient-limited conditions,” Behringer said. “It’s kind of cruel really, because for us researchers it feels like we are just mixing up tubes every 10 days, but the bacteria are participating in The Hunger Games.”

Every 100 days for 900 days total, Behringer and Ho sequenced the bacterial genomes. After nine genome sequencing timepoints, the researchers confirmed that though the bacteria started as a group of highly similar individuals, they quickly evolved into two specialized kinds, or ecotypes. One ecotype spent energy gathering iron from the environment but did not put much energy into producing fatty acids. The other ecotype did not gather iron efficiently but did well producing fatty acids.

While we know that cooperative interactions occur in our guts and in the wild, we know less about how these interactions arise. To date, most of the study of cross-feeding in the lab has focused on microbes that have been engineered to cooperate or where the interaction has evolved in the lab, but it’s one-sided (A feeds B, but B doesn’t feed A), Behringer said. In this study we found that through repeated cycles of feast and famine, bacteria can evolve what appears to be bidirectional cross-feeding (A feeds B, and B feeds A).

This is exciting because until now evolution has trouble explaining this type of efficient cooperation. Feast and famine are very natural fluctuations for bacteria. Even in our guts—an environment thought of as nutrient-rich—bacteria can still be constrained for certain resources, like nitrogen. The study’s results suggest that these feast and famine dynamics can provide the conditions for bacteria to evolve cooperative cross-feeding behaviors and provide insight into how the bacterial communities that reside in our guts, with our crops, in lakes and streams, and beyond become so complex.

“Our results [show that] mutualistic behaviors and populational structures can emerge even within a single species,” Ho said. “The results from our experiment will serve as a good model for the evolutionary study of mutualism.” In biology, mutualism acknowledges the interaction between at least two species, where each contributes to a net benefit for the interacting species.

“We further hypothesized that the bacteria were evolving to become more efficient by sharing the burden of performing these functions which would be beneficial in starvation conditions,” Behringer said. “Bacteria are often faced with cycles of feast and famine in nature. The evolution we observed in this experiment in the lab may be similar to how these cooperative behaviors evolve in wild microbial populations.”

The next step is to investigate these behaviors at a finer scale. The group knows what happens after every 100 days, and they have frozen bacteria from every 30 days through the experiment, a window into what is happening before the bacteria evolve into two distinct ecotypes. They also plan to look for cheaters—organisms that use the byproducts of other bacteria but do not produce any on their own.