Dragonflies use vision, subtle wing control to straighten up and fly right

The research reveals a chain of mechanisms that begins with the dragonfly’s eyes – all five of them – and continues through its muscles and wing pitch. 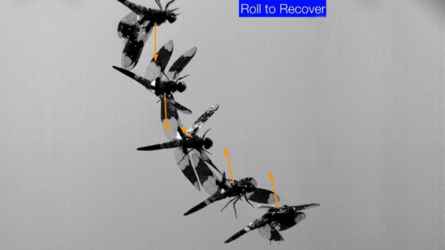 With their stretched bodies, immense wingspan and iridescent coloring, dragonflies are a unique sight. But their originality doesn’t end with their looks: As one of the oldest insect species on the planet, they are an early innovator of aerial flight.

The research reveals a chain of mechanisms that begins with the dragonfly’s eyes – all five of them – and continues through its muscles and wing pitch.

For two decades, Wang has been using complex mathematical modeling to understand the mechanics of insect flight. For Wang, physics is just as important as genetics in explaining the evolution of living organisms.

“Insects are the most abundant species and were the first to discover aerial flight. And dragonflies are some of the most ancient insects,” Wang said. “Trying to look at how they right themselves in air would give us insight about both the origin of flight and how animals evolved neuro-circuitries for balancing in air and navigating through space.”

The project began several years ago when Wang was a visiting scientist at HHMI’s Janelia Research Campus, where her collaborator Leonardo was 3D-tracking dragonflies in a large arena. Wang was inspired to scrutinize them more closely.

“When we looked at their flight behavior, we were simultaneously in awe and frustrated,” she said. “The trajectories are complex and unpredictable. Dragonflies constantly make maneuvers, without following any obvious direction. It’s mysterious.”

To study these flight dynamics and the internal algorithms that govern them, Wang and Melfi designed a controlled-behavioral experiment in which a dragonfly would be dropped upside down from a magnetic tether – a premise not unlike the famous falling cat experiments from the 1800s that showed how certain “hardwired reflexes” resulted in the felines landing on their feet.

Wang and Melfi found that by releasing a dragonfly carefully without leg contact, the insect’sconfounding maneuvers actually followed the same pattern of motion, which the researchers were able to capture with three high-speed video cameras filming at 4,000 frames per second. Markers were put on the dragonfly’s wings and body, and the motions were reconstructed via 3D-tracking software.

Then came the most challenging part: trying to make sense of the movements. The researchers had to consider numerous factors – from the unsteady aerodynamics of wing and air interactions to the way a dragonfly’s body responds to its wings flapping. There’s also that persnickety force that all earthly beings must eventually contend with: gravity.

Wang and Melfi were able to create a computational model that successfully simulated the dragonfly’s aerobatics. But one key question lingered: How do dragonflies know they are falling, so that they can correct their trajectory?

Wang realized that, unlike humans who have an inertial sense, dragonflies could rely on their two visual systems – a pair of large compound eyes, and three simple eyes called ocelli – to gauge their uprightness.

She tested her theory by blocking a dragonfly’s eyes with paint and repeating the experiment. This time, the dragonfly had much more difficulty recovering midflight.

“These experiments suggest that vision is the first and dominant pathway to initiate the dragonfly’s righting reflex,” Wang said.

That visual cue triggers a series of reflexes that sends neural signals to the dragonfly’s four wings, which are driven by a set of direct muscles that modulate the left-wing and right-wing pitch asymmetry accordingly. With three or four wing strokes, a tumbling dragonfly can roll 180 degrees and resume flying right-side up. The entire process takes about 200 milliseconds.

“What was difficult was figuring out the key control strategy from the  experimental data,” Wang said. “It took us a very long time to understand the mechanism by which a small amount of pitch asymmetry can lead to the observed rotation. The key asymmetry is hidden among many other changes.”

The combination of kinematic analysis, physical modeling and 3D flight simulations now gives researchers a noninvasive way to infer the crucial connections between an animal’s observed behaviors and the internal procedures that control them. These insights can also be used by engineers looking to improve the performance of small flying machines and robots.

“Flight control on the timescale of tens or hundreds of milliseconds is difficult to engineer,” Wang said. “Small flapping machines now can take off and turn, but still have trouble remaining in the air. When they tilt, it is hard to correct. One of the things that animals have to do is precisely solve these kinds of problems.”