New study investigates why virus spillovers cause widespread disease in some new host species yet fizzle out in other species. 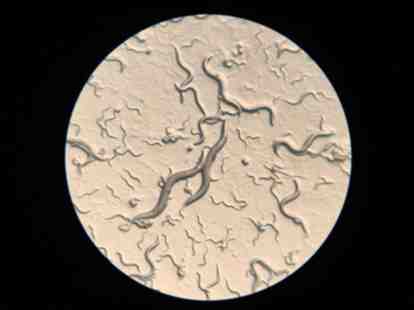 To study the outcomes of virus spillover, researchers placed small amounts of a virus onto petri-dish plates harboring populations of different Caenorhabditis species to see if the virus could replicate. Credit: David Kennedy, Penn Statet. All Rights Reserved.

Why has the SARS-CoV-2 virus ravaged the global human population, but many other animal viruses haven't? Using nematode worms as a model, researchers at Penn State conducted a set of experiments to investigate the factors influencing the disease outcomes of virus spillover events. They found that the species of the host influences whether a virus will take off in a new population. For example, some species never get infected, while others become infected and readily transmit the virus to other individuals within the species.

“Pathogens spill over into humans with somewhat alarming frequency, and a ton of terrific research has gone into determining where and when spillover is most likely,” said David Kennedy, assistant professor of biology. “However, experimentally studying virus spillover in the lab to understand the likelihood that a virus will be transmissible in a new host is hugely challenging, especially with the replication needed to gain scientific insight.”

Clara Shaw, a postdoctoral scholar at Penn State, who is starting a new position in January as an assistant professor at the University of Minnesota Duluth, noted that worms are a powerful experimental system.

“You can have an entire population of hosts in a single petri dish, and you can fit 50 replicate populations in a space the size of a shoebox,” said Shaw. “This worm-virus system can allow for the careful study needed to inform which spillover events are likely to become the next COVID-19, and which ones are less concerning for human and animal health.”

To conduct their study, which was published Sept. 21 in Proceedings of the Royal Society B, the researchers used species of nematode worms from the genus Caenorhabditis. One of these — Caenorhabditis elegans (C. elegans) — is commonly used in other types of biological experiments.

To first determine if the genus Caenorhabditis would be a useful system for studying the ecology and evolution of virus host jumps, the team examined the susceptibility of 44 species of Caenorhabditis to infection by the Orsay virus, a virus known to infect the well-studied C. elegans species, but not documented to occur in other species. They placed small amounts of the virus onto petri-dish plates harboring populations of different Caenorhabditis species to see if the virus could replicate. Of the 44 species tested, 14 species were susceptible to Orsay virus.