Discovery illuminates how Parkinson’s disease spreads in the brain

The study could resolve one of the mysteries of Parkinson’s disease and lead to new strategies for treating or preventing the neurological disorder. 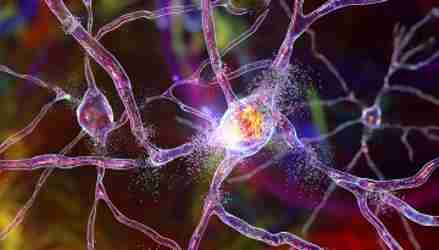 Aggregates of the protein alpha-synuclein spread in the brains of people with Parkinson’s disease through a cellular waste-ejection process, suggests a new study led by Weill Cornell Medicine researchers.

During the process, called lysosomal exocytosis, neurons eject protein waste they cannot break down and recycle. The discovery, published Aug. 22 in Nature Communications, could resolve one of the mysteries of Parkinson’s disease and lead to new strategies for treating or preventing the neurological disorder.

“Our results also suggest that lysosomal exocytosis could be a general mechanism for the disposal of aggregated and degradation-resistant proteins from neurons – in normal, healthy circumstances and in neurodegenerative diseases,” said study senior author Manu Sharma, assistant professor of neuroscience in the Feil Family Brain and Mind Research Institute and Appel Alzheimer’s Disease Research Institute at Weill Cornell Medicine.

Parkinson’s is a disorder that features the deaths of neurons in a characteristic pattern of spread through the brain, normally unfolding over decades. The disease is best known for causing hand tremors, muscle rigidity, slowed gait and other impairments of normal movement. But it affects a broad set of brain regions, resulting in many different symptoms, including dementia in late stages. Approximately 1 million people in the United States have Parkinson’s. Available treatments can alleviate some movement abnormalities but do not stop disease progression – essentially because researchers don’t yet have a full understanding of that process.

One important finding that has emerged from the past few decades of Parkinson’s research is that the deaths of neurons in the disease follow the spread, within the brain, of abnormal aggregates of alpha synuclein, a neuronal protein. This spread is an infection-like, chain-reaction process in which aggregates induce normal alpha synuclein to join them, and – as they grow larger – break into smaller aggregates that continue to propagate. Experiments in mice and nonhuman primates have shown that injecting these aggregates into the brain can initiate this spread as well as some Parkinson’s-like neurodegeneration. But the details of how neurons transmit them to other neurons have never been well understood.

In the study, Sharma and his team, including co-first author Ying Xue Xie, a doctoral student in the Weill Cornell Graduate School of Medical Sciences, showed with detailed studies of Parkinson’s mouse models that alpha synuclein aggregates – capable of spreading and causing neurodegeneration – originated within neurons. These aggregates, they found, then accumulate within capsule-like waste bins in cells called lysosomes.

Lysosomes contain enzymes that can break down, or “lyse,” proteins and other molecular waste into their building blocks, essentially digesting and recycling them. But the researchers found evidence that alpha synuclein aggregates, which are knit together with tight bonds in a close-fitting/snugly layered structure called “amyloid,” are not broken down well within lysosomes; instead, they were often found to be simply dumped from their originating neurons.

In this process, exocytosis, the lysosome moves to the cell membrane and merges with it, so that the lysosome contents are discharged – as-is, without any encapsulation – into the fluid surrounding the cell. The finding helps resolve a hotly debated question in the field.

The researchers also showed in further experiments that by reducing the rate of lysosomal exocytosis, they could reduce the apparent concentration of spread-capable aggregates. That, Sharma said, suggests a future approach to treating Parkinson’s.

“We don’t know yet, but neurons might be better off, even in the long term, if they keep these aggregates inside their lysosomes,” he said. “We see a similar impairment of lysosomal function in some genetic disorders, but these don’t necessarily lead to a Parkinson’s level of disease.”

Sharma said prior studies, including genetic studies, have linked lysosomal abnormalities not only to Parkinson’s but to also many other neurodegenerative disorders. This hints that lysosomal exocytosis may be a general mechanism of protein-aggregate spread in these diseases – and potentially a general target for treatments and preventives.

He and his team are currently following up with studies of lysosomes’ roles in Alzheimer’s disease.