Differences between brains of primates are small but significant 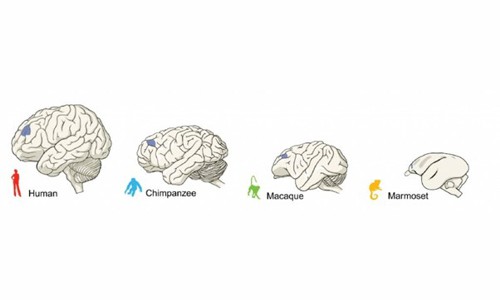 Researchers analyzed genetic material from cells in the prefrontal cortex (the area shaded in each brain) from four closely related primates to characterize subtle differences in cell type and genetics.

While the physical differences between humans and non-human primates are quite distinct, a new study reveals their brains may be remarkably similar. And yet, the smallest changes may make big differences in developmental and psychiatric disorders.

Understanding the molecular differences that make the human brain distinct can help researchers study disruptions in its development. A new study, published recently in the journal Science by a team including University of Wisconsin–Madison neuroscience professor Andre Sousa, investigates the differences and similarities of cells in the prefrontal cortex — the frontmost region of the brain, an area that plays a central role in higher cognitive functions — between humans and non-human primates such as chimpanzees, Rhesus macaques and marmosets.

The cellular differences between these species may illuminate steps in their evolution and how those differences can be implicated in disorders, such as autism and intellectual disabilities, seen in humans. Sousa, who studies the developmental biology of the brain at UW–Madison’s Waisman Center, decided to start by studying and categorizing the cells in the prefrontal cortex in partnership with the Yale University lab where he worked as a postdoctoral researcher.

“We are profiling the dorsolateral prefrontal cortex because it is particularly interesting. This cortical area only exists in primates. It doesn’t exist in other species,” Sousa says. “It has been associated with several relevant functions in terms of high cognition, like working memory. It has also been implicated in several neuropsychiatric disorders. So, we decided to do this study to understand what is unique about humans in this brain region.”

Sousa and his lab collected genetic information from more than 600,000 prefrontal cortex cells from tissue samples from humans, chimpanzees, macaques and marmosets. They analyzed that data to categorize the cells into types and determine the differences in similar cells across species. Unsurprisingly, the vast majority of the cells were fairly comparable.

“Most of the cells are actually very similar because these species are relatively close evolutionarily,” Sousa says.

Sousa and his collaborators found five cell types in the prefrontal cortex that were not present in all four of the species. They also found differences in the abundancies of certain cell types as well as diversity among similar cell populations across species. When comparing a chimpanzee to a human the differences seem huge — from their physical appearances down to the capabilities of their brains. But at the cellular and genetic level, at least in the prefrontal cortex, the similarities are many and the dissimilarities sparing.

“Our lab really wants to know what is unique about the human brain. Obviously from this study and our previous work, most of it is actually the same, at least among primates,” Sousa says.

The slight differences the researchers found may be the beginning of determining some of those unique factors, and that information could lead to revelations about development and developmental disorders at a molecular level.

“We want to know what happened after the evolutionary split between humans and other primates,” Sousa says. “The idea is you have a mutation in a gene or in several genes and those genes now have slightly different functions. But if these genes are relevant for brain development, for example, how many of a certain cell is produced, or how cells are connecting to other cells, how is it affecting the neuronal circuitry and their physiological properties? We want to understand how these differences lead to differences in the brain and then lead to differences we can observe in adults.”

The study’s observations were made in the brains of adults, after much of the development is complete. This means that the differences may be occurring during the brain’s development. So, the researchers’ next step is to study samples from developing brains and extend their area of investigation past the prefrontal cortex to potentially find where and when these differences originate. The hope is that this information will lead to a more robust foundation to lay developmental disorder research on top of.

“We are able to do extraordinary things, right? We are studying life itself, the universe, and so much more. And this is really unique when you look around,” says Sousa, whose team included graduate students Ryan Risgaards and Zachary Gomez-Sanchez, research intern Danielle Schmidt, and undergraduate students Ashwin Debnath and Cade Hottman. “If we have these unique abilities, it has to be something in the brain, right? There is something in the brain that allows us to do all of that and we are really interested in knowing what it is.”