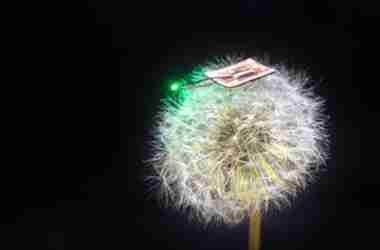 With wireless-enabled electronics becoming smaller and more ubiquitous, their designers must constantly find ways for batteries to store more power in less space. And because these devices are also increasingly mobile — in the form of wearables, robots and more — those batteries must be lighter while still being able to withstand the bumps and bruises of everyday life. Worse still, energy density gets exponentially harder to improve upon as a battery gets smaller, partially because larger portions of a battery’s footprint must be devoted to protective packaging. With that challenge in mind, new research from the University of Pennsylvania’s School of Engineering and Applied Science has shown a new way to build and package micro batteries that maximizes energy density even at the smallest sizes. The researchers’ key developments were a new kind of current collector and cathode that increase the fraction of materials that store energy while simultaneously serving as a protective shell. This reduces the need for non-conductive packaging that normally protects a battery’s sensitive internal chemicals. That extra space efficiency results in an energy density four times that of current state-of-the-art micro batteries. Light enough to be carried by an insect, the researchers’ micro battery design opens the door for smaller flying microrobots, implanted medical devices with longer lifespans and a variety of otherwise impossible devices for the Internet of Things.

The study, published in the journal Advanced Materials, was led by Pikul, Xiujun Yue, a postdoctoral scholar in his lab, Paul Braun, professor in the Department of Materials Science and Engineering at the University of Illinois at Urbana Champaign, and John Cook, Director of R&D at Xerion Advanced Battery Corp. The researchers developed a new way to make electrodes that allowed them to be thick while also allowing fast ion and electron transport. Conventional cathodes consist of crushed particles compressed together, a process that results in large spaces between electrodes and a random internal configuration that slows ions as they move through the battery. These redesigned components are so efficient at transporting ions that they can be made thick enough to double the amount of energy-storing chemicals without sacrificing the speed necessary to actually power the devices they’re connected to. Combined with the new packaging, these microbatteries have the energy and power density of batteries that are a hundred times larger while only weighing as much as two grains of rice.