Astronomers have recorded such a sequence for a star about 120 million light years from Earth and, before it collapsed and exploded 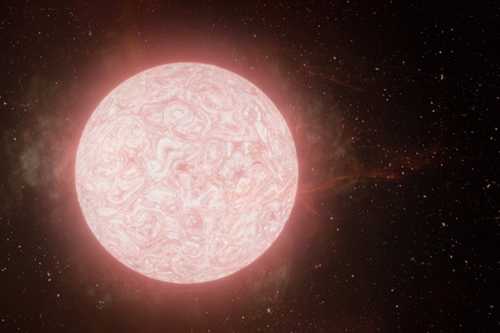 An artist’s impression of a red supergiant in the final year of its life emitting a massive cloud of gas. New observations suggest that at least some of these bloated stars undergo tumultuous internal changes before exploding in a supernova. See animation. (Image courtesy of W. M. Keck Observatory/Adam Makarenko)

Astronomers have long suspected that massive stars become red supergiants at the end of their lives, hiccup a few times and then explode in a classic supernova visible across the universe. But no one had ever seen this scenario play out in a single star.

Now, thanks to coordinated observations by numerous ground- and space-based telescopes, astronomers have recorded such a sequence for a star about 120 million light years from Earth and, before it collapsed and exploded, about 10 times the mass of the sun.

“It’s like watching a ticking time bomb,” said senior author Raffaella Margutti, associate professor of astronomy and of physics at UC Berkeley. “We’ve never confirmed such violent activity in a dying red supergiant star, where we see it produce such a luminous emission, then collapse and combust, until now.”

Though light from the explosion likely reached Earth for the first time on Sept. 6, 2020, astronomers were only alerted to the supernova, SN 2020tlf, on Sept. 16. Teams around the world quickly started observing it in many wavelengths, from X-ray to radio, using a variety of telescopes. The W. M. Keck Observatory atop Maunakea, the largest volcano on the island of Hawaiʻi, was the first to obtain a spectrum of the explosion, but Margutti and her colleagues also used other, multiwavelength observations to analyze the explosion. They later matched the supernova, a Type II, with a red supergiant star that had been observed to brighten rapidly a few months earlier by Pan-STARRS, a telescope operated by the University of Hawaiʻi Institute for Astronomy on Haleakalā, the only active volcano on Maui.

The increase in brightness in the final months before the star exploded suggests that, before they collapse, at least some, and perhaps most, of these red supergiants undergo significant changes in their internal structure that result in the tumultuous ejection of gas. The researchers estimate that the red supergiant star had bloated to a size that, in our solar system, would reach the orbit of Jupiter.

“This is a breakthrough in our understanding of what massive stars do moments before they die,” said UC Berkeley graduate student and lead author Wynn Jacobson-Galán. “Direct detection of pre-supernova activity in a red supergiant star has never been observed before in an ordinary Type II supernova. For the first time, we watched a red supergiant star explode.”

Details of the discovery were published in of The Astrophysical Journal.

Type II supernovae presumably result when massive old stars deplete their fuel and collapse, generating a powerful explosion that leaves behind a dense object — either a neutron star or a black hole — at the center. Prior to the discovery of this supernova in a galaxy known as NGC 5731, red supergiant progenitors of Type II supernovae appeared to be quiet, showing no evidence of violent eruptions or luminous emission before exploding.

Margutti, Jacobson-Galán and their colleagues suspect that this may be because the stellar outbursts are faint. They expect to detect more such pre-explosion outbursts when new, more powerful telescopes, such as the Vera Rubin Telescope in Chile, with which Margutti is affiliated, come online.

The researchers suggest that before the star’s ultimate explosion, the gaseous material it expelled — which may have contained as much as one-tenth the mass of the red supergiant — could have come from nuclear reactions inside the star that occurred after it exhausted all if its initial hydrogen and helium fuel. Stars fuse lighter elements into heavier elements, generating energy, but at late stages, the energy from fusion tapers off and eventually stops, allowing the stars to collapse onto themselves because of gravity.

Models of nuclear reactions inside such massive stars suggest that sudden flashes of neon and oxygen fusion could generate gravitational waves that blow off some of the outer regions of the star. Alternatively, a silicon flash — the brief and final stage of fusion before stellar collapse — could have done the same.

The outbursts were first recorded about 130 days before the explosion by the Young Supernova Experiment (YSE), a survey on the Pan-Starrs telescopes that automatically scans the telescopes’ data for rapidly brightening objects. Observations after the supernova confirmed the presence of material around the star. The team’s discovery means that transient surveys like YSE can hunt for luminous radiation coming from red supergiants and help gather more evidence that such behavior could signal the imminent, supernova demise of a massive star.

“I am most excited by all of the new unknowns that have been unlocked by this discovery,” said Jacobson-Galán. “Detecting more events like SN 2020tlf will dramatically impact how we define the final months of stellar evolution, uniting observers and theorists in the quest to solve the mystery on how massive stars spend the final moments of their lives.”

Margutti and Jacobson-Galán conducted most of the study during their time at Northwestern University, where Margutti served as associate professor of physics and astronomy before coming to UC Berkeley.

Source: Based on the UC Berkeley news release written by Robert Sanders