Using advanced tagging to track the movement of individual animals across the world, a research project is opening a new frontier in efforts to monitor biodiversity change 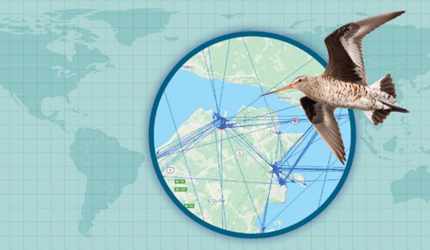 The Hudsonian godwit shown with its migrations patterns tracked in space. (Image courtesy of the Max Planck Institute of Animal Behavior.)

A global team of researchers, including Yale scientists, is using advanced tagging to track the movement of individual animals across the world, an ambitious research project that is opening a new frontier in efforts to monitor biodiversity change and pinpoint areas for conservation intervention.

For the project, individual animals from 15 species worldwide were tagged with lightweight sensors that transmit data to the International Space Station, which then transmits the information to a single system for integration and interpretation. Since late 2021, the new technology has captured the movements of hundreds of small animals, such as blackbirds, artic terns, and even bats. Eventually they hope to track many species of reptiles, mammals, and insects.

The first findings are described March 8 in the journal Trends in Ecology and Evolution.

“For the first time, we are able to have a finger on the pulse of life worldwide,” said Walter Jetz, lead author of the study, co-director of the Max Planck-Yale Center for Biodiversity Movement and Global Change (MPYC), and a professor of ecology and evolutionary biology and of the environment at Yale. “This now operational technology blazes the trail for a biological earth observation with animal sensors.”

Given the low cost and small tag size researchers hope to scale the effort to thousands of species and deliver data about animal lives globally in real time, said Jetz.

The project is called ICARUS or International Cooperation for Animal Research Using Space, a collaboration of international scientists led by the Max Planck Society.

The effort relies upon trained volunteers to place the miniature sensors, which weigh less than one-tenth of an ounce, on individual animals. The sensors not only record GPS data but can also supply other information on conditions experienced by animals, such as temperature.

Data from the sensors are collected from the International Space Station and then transmitted to computers on the ground. While most of the species tagged so far are birds, future tagging could include many species of land animals, researchers say.

“Rather than globe-orbiting sensors capturing images of the planet’s surface for subsequent interpretation, animals, through countless individual movement decisions, seek out their preferred conditions, sensing the quality and health of ecosystems in real time,” said Martin Wikelski, co-director of MPYC, research director at the Max Planck Institute for Animal Behavior in Germany, and originator of ICARUS.

For instance, scientists will not only be able to identify areas essential for survival of the animals, but identify areas where biodiversity may be threatened by human encroachment or poaching when anticipated migration routes are blocked.

With the technology now in place, the Max Planck-Yale Center is currently raising funds to purchase more sensors, which cost about $300 each, support researchers worldwide to use and scale up the system, train volunteers, and integrate information sharing platforms. The group is also negotiating with NASA and the German space agencies to place new data collection devices on satellites.

“The dream is an ongoing cohort of say 100,000 animal sentinels that help us humans measure, understand, and mitigate our changes to this planet,” Jetz said.

Movements across space and environments, home ranges and migration corridors from these new data can be explored at the website https://animallives.org, an initiative of the international Max Planck-Yale Center for Biodiversity Movement and Global Change (MPYC).