Scientists have demonstrated for the first time that the associated Cas9 enzyme can bind to and cut the target DNA at very low temperatures. 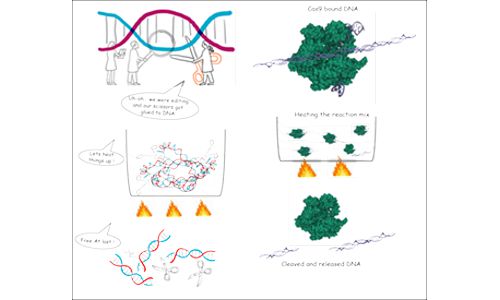 Scientists have demonstrated for the first time that the associated Cas9 enzyme can bind to and cut the target DNA at very low temperatures.

The CRISPR gene-editing technology that received the Nobel Prize in 2020 has witnessed a new height. Indian scientists have demonstrated for the first time that the associated Cas9 enzyme, which acts as molecular scissors to cut DNA at a location specified by a guide RNA, can bind to and cut the target DNA at very low temperatures.

This work has shown the highly efficient functioning of this platform at temperatures as low as 4oC, making it possible to edit genes in temperature sensitive organisms, plants, or crop varieties.

CRISPR (Clustered Regularly Interspaced Short Palindromic Repeats) are short DNA sequences found in the genome of prokaryotic organisms such as bacteria, which are reminders of previous bacteriophage (viruses) attacks that the bacteria successfully defended against. Cas9 enzyme (part of bacteria’s defence mechanism) uses these flags to precisely target and cut any foreign DNA, thus protecting the bacteria from future attacks by similar bacteriophages. The unprecedented precision of targeting the DNA sequences and then efficiently cutting them is the basis for CRISPR-Cas9 technology, which has been recently demonstrated in editing genes in cells and organisms.

CRISPR-Cas9 technology has been successfully used for many purposes, including basic studies of gene function, agriculture, and medicine to increase our knowledge of disease processes and their potential future therapies. So far, most binding trials were typically performed at 37 °C.

As a further step to advance this platform into the forefront of biomedical and analytical biotechnology, scientists of Raman Research Institute (RRI), an autonomous institute of the Department of Science and Technology (DST), have explored temperature-dependent binding and release of cleaved products by the Cas9 enzyme. Serene Rose David, Sumanth Kumar Maheshwaram, Divya Shet & Mahesh B. Lakshminarayana, under the guidance of Dr. Gautam V. Soni, have demonstrated that the Cas9 enzymes strongly bind to the target at very low temperatures and remains bound to the cleaved DNA products even after the enzyme has done its job. Subsequently, the bound products were released in a controlled fashion using high temperature or chemical denaturant (that make proteins and DNA lose their 3-dimensional structure and become non-functional).

The research published in the Scientific Reports journal of the Nature Portfolio expands possible application of the Cas9-based genetic toolbox to a previously unexplored temperature range that would be compatible with long-term storage of biological samples.

Their observations on high efficiency of Cas9 binding to target at very low temperatures also provide opportunities to edit genomes of the less explored organisms called cryophiles with an optimal growth temperature of 15°C. The results on Cas9-DNA binding and release mechanics will provide valuable insights for developing temperature-dependent applications of the CRISPR-Cas9 technology. It also builds a quantitative understanding of product release mechanism of this enzyme system.