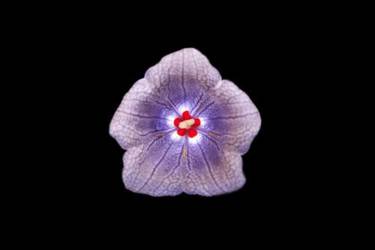 Plants that secrete colored nectars are part of an exclusive club. To date, only 70 plants in the world are on that list. The colors lure in pollinators, but more recently they sparked the interest of researchers and industry partners in search of natural colorant options.

Over the past several years, a team of researchers, including a handful from the University of Minnesota, sorted out how plants produced distinctive red nectar and its makeup in a newly published study in Proceedings of the National Academies of Sciences.

One of such plants, called Nesocodon mauritianus, is endemic to the island of Mauritius and first caught the eye of Clay Carter, a professor in the College of Biological Sciences, during a tour of the Conservatory & Botanical Collection at the University of Minnesota.

“I first met the plant on May 2, 2016 and wondered what is behind that red nectar,” says Carter. “When I started the research, I certainly wasn’t expecting to turn heads of multinational companies.”

The research team identified two enzymes never described in plants before. They compared Nesocodon mauritianus with another red nectar plant from the other side of the world. Surprisingly, these two plants both rely on the same compound — researchers named it nesocodin — to produce red nectar and attract their respective pollinators.

“Studying examples like these can tell us a lot about basic rules of adaptation, especially when viewed at the genetic and biochemical level,” says Carter.

The research also has direct applications. According to the U.S. Food and Drug Administration, industry currently relies heavily on non-natural color additives. Red is a notoriously hard color to source for products, from candy to clothing, and beyond.

With knowledge of the biochemical and molecular mechanisms, researchers created a synthetic red nectar. The researchers also sought feedback from an expert in the form of geckos, a pollinator of Nesocodon mauritianus. The synthetic nectar passed the gecko test, which was run by researchers at George Mason University.

“For years natural red colorants have been inaccessible for many product formulations because of their chemical properties,” says Adrian Hegeman, a professor in the College of Food, Agricultural and Natural Resource Sciences and a co-author on the study. “Since nesocodin has different properties, it’s poised to work well in conditions where other natural colorants failed in the past.”