Conversing with infants may affect their brain circuitry 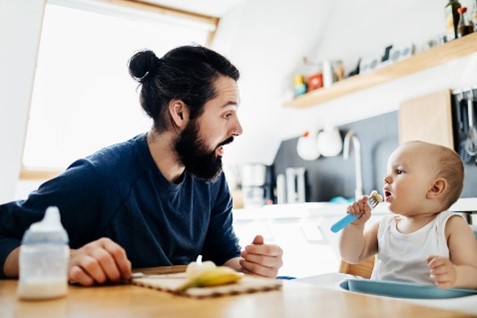 While babies aren’t known for being great conversationalists, talking to them can still be worthwhile. A new Stanford study finds that engaging in “conversations” with adults may help infant brains develop, especially those areas involved in language comprehension.

In a new study, published Nov. 30 in the Journal of Neuroscience, Stanford researchers assessed the brain function of sleeping babies, aged five to eight months old, using functional magnetic resonance imaging (fMRI) scans. They also outfitted these San Francisco Bay Area infants with a special, wearable device – a sort of “talk pedometer” – which recorded at least eight hours of all the nearby, clear speech in their home environments on a typical day.

Using these data, the researchers were able to calculate the quantity of the conversations that babies engaged in with the adults in their environments. Even though infants of this age can’t take part in complex conversations, they can babble syllables – the building blocks of words – in order to respond to their caregivers or to elicit a response.

“Before infants are even producing words, our findings indicate that the conversations we have with infants matter for their brain function,” said Lucy King, the study’s lead author and a doctoral candidate in Stanford’s Department of Psychology in the School of Humanities and Sciences. “There seems to be something special about these conversational dynamics between infants and caregivers, versus just the raw amount of stimulation that infants receive.”

Of the 99 infants who completed recordings of their home language environments as part of the observational study, 51 went on to provide fMRI brain scans. Collecting the imaging data for this study wasn’t easy, given that infants can’t follow directions like being told to be still during scanning. “When we started this, no one had scanned infants for research at Stanford, so we had to set up all of the procedures,” said study co-author Ian Gotlib, the David Starr Jordan Professor in the School of Humanities and Sciences and the director of the Stanford Neurodevelopment, Affect and Psychopathology Laboratory, where the research was conducted.

The researchers scheduled the brain scans close to infants’ bedtimes so that the babies could sleep during scanning. Mothers helped to soothe infants to sleep in the scanning facility. For every scan, there was a researcher who played the role of “baby whisperer,” designated to monitor the baby throughout the scan. There was also a “parent whisperer,” who helped support parents and communicate with them about the testing procedures.

The researchers focused their analyses on functional connectivity – a measure of how activation in different areas of the brain rises and falls in synchrony – in brain regions in the infants’ temporal cortex that are linked with language comprehension. They found that babies who engaged in more conversations with adults in their everyday lives had less synchronized activation in a network of regions that processes language stimulation.

Interestingly, this brain effect was only observed in babies that adults conversed with directly, and not in those who only overheard speech between other adults. These findings support previous behavioral findings about the importance of direct conversations for a baby’s language development. “Infants experience a really rapid period of brain development during the first, very important year of life,” King said.

The Stanford researchers caution that further study is needed to better understand how brain function may be associated with the development of language later on in life. But King says this study helps to establish the importance of continuing to conduct research to understand the role of the early environment in language development so that researchers can “identify the factors of the early environment that we might want to target and interventions to help promote infant development.”

“Using these data, you can imagine interventions, training programs or parenting programs, aimed at increasing these kinds of meaningful back-and-forth conversations, assuming that the associations that we are documenting with the infant brain are going to have significant consequences later in life,” Gotlib said.

The lab is following up with participating parents and their infants at 18 months of age to examine how they are developing – including looking at empathy, social relatedness, vocabulary and early signs of psychopathology.

The researchers hope their findings can inspire policies or practices to help families in the future.

“We, as a society, must support parents so that they have the time and resources to engage in these rich interactions with their infants,” King said. “That’s especially top of mind right now when so many parents are taxed by everything they’re juggling – childcare, work and the chronic stress of the pandemic.”

Funding was provided by the National Institutes of Health (Grant numbers R21 MH111978 and R2131 HD090493), the National Science Foundation and the Jacobs Foundation.