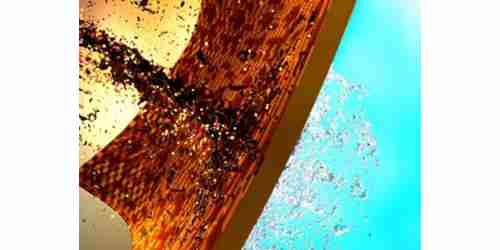 Given increasing demand and increasingly stretched water resources, scientists are pursuing more innovative ways to use and reuse existing water, as well as to design new materials to improve water purification methods. “Fouling significantly reduces performance and is a major obstacle in designing membranes to treat produced water,” said M. Scott Shell, a chemical engineering professor at UC Santa Barbara, who conducts computational simulations of soft materials and biomaterials. “If we can fundamentally understand how solute stickiness is affected by the chemical composition of membrane surfaces, including possible patterning of functional groups on these surfaces, then we can begin to design next-generation, fouling-resistant membranes to repel a wide range of solute types.” Now, in a paper published in the Proceedings of the National Academy of Sciences (PNAS), Shell and lead author Jacob Monroe explain the relevance of macroscopic characterizations of solute-to-surface affinity.

“Solute-surface interactions are particularly important in water separation and purification, where often many distinct types of solutes need to be removed or captured,” said Monroe, now a postdoctoral researcher at the National Institute of Standards and Technology (NIST). The computational research group developed an algorithm to repattern surfaces by rearranging surface chemical groups in order to minimize or maximize the affinity of a given solute to the surface, or alternatively, to maximize the surface affinity of one solute relative to that of another. The approach relied on a genetic algorithm that “evolved” surface patterns in a way similar to natural selection, optimizing them toward a particular function goal. Through simulations, the team discovered that surface affinity was poorly correlated to conventional methods of solute hydrophobicity, such as how soluble a solute is in water. Instead, they found a stronger connection between surface affinity and the way that water molecules near a surface or near a solute change their structures in response.

The finding is significant because it shows that in designing new surfaces, researchers should focus on the response of water molecules around them and avoid being guided by conventional hydrophobicity metrics. Based on their findings, Monroe and Shell say that surfaces comprised of different types of molecular chemistries may be the key to achieving multiple performance goals, such as preventing an assortment of solutes from fouling a membrane. According to the team, their findings show that computational methods can contribute in significant ways to next-generation membrane systems for sustainable water treatment.