Researchers have estimated with unprecedented accuracy the number of neurons and other types of cells in the brain of fruit fly larvae—and discovered that females have substantially more neurons than males. 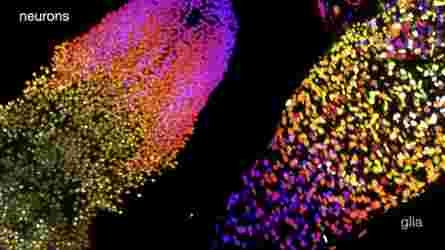 Determining the number of cells in the brain is key to the study of brain structure and function. But counting neurons from microscopy images is time-consuming, and the human eye is easily exhausted. To overcome this problem, researchers typically slice up brain tissue and then count the number of cells in one section to estimate the total number of neurons in the brain. But these methods are error-prone, because they assume that the number of neurons or other cells is the same throughout the brain. Now, EPFL scientists have developed a new approach to identify cells with superhuman accuracy and speed in the intact brain of a Drosophila (fruit fly) larva, an important neuroscience model organism.

The results revealed fewer neurons and many more glia—a type of cells that support and protect neurons—than previously thought. The team also discovered unexpected differences between the brains of male and female larvae, with females having substantially more neurons than males.

“At the moment, scientists are trying to make robots or computers solve problems that humans have traditionally solved,” says study senior author Brian McCabe, director of the Laboratory of Neural Genetics and Disease and a Professor at the EPFL School of Life Sciences. “We try to meet computers halfway by making the problem easier for them to solve.” For example, when neuroscientists look at nerve cells, they label the entire cell’s surface. However, neurons can have extremely complex structures: like other cells, they have a roundish cell body where the nucleus and other cellular structures are located; but neurons have something that other cells don’t—intricate protrusions that extend from the cell body to transport electrical and chemical signals in and out of the cell. “That’s very difficult for computers to measure,” McCabe says.

Working in larvae of Drosophila, Wei Jiao, a postdoctoral scientist in the McCabe lab, and her colleagues used genetic tools to express a fluorescent tag that would make only a neuron’s nucleus glow. Then, they imaged the brain of the larvae using a sophisticated microscopy technique that allows researchers to create a 3D image of a sample without damaging it. Finally, the team asked computers to inspect and analyze the microscopy images. “In these images, the neuron is just a dot, and machine vision doesn’t have to look for complex 3D shapes—it just has to count the dots,” McCabe says.

Using this approach, the team found that female larval brains have about 10,300 neurons, between 15 to 30% fewer than previously estimated, and about 3,800 glial cells, three times more than previously predicted.

The brains of male larvae have about 9,400 neurons, nearly 10% fewer neurons than those of females. But they have about 4% more glial cells than their female counterpart, the researchers found. “At the larval stage, Drosophila don’t have any external sex organs, so finding such a big difference was surprising,” McCabe says.

Further analyses done by mathematicians led by Kathryn Hess, director of the Laboratory for Topology and Neuroscience and a Professor at the EPFL School of Life Sciences, confirmed sex differences in the brain. When the researchers analyzed the data using methods from an area of mathematics called topology, which studies the shape of data, they could predict with 99% accuracy the sex of the animal just from the topology of its brain. “The emergent global structure of the male brain appears to be different from that of the female brain,” Hess says. The findings were published in eLife.

Although there’s currently no explanation for these sex differences, McCabe speculates that behavioral differences may contribute to the varying number of neurons and glial cells between male and female brains. However, he adds, the findings highlight that when studying behaviors or brain wiring, researchers need to look at both sexes.

Now that the researchers have determined with precision the number of brain cells in the Drosophila larva, they want to investigate how neurons are connected to each other and what function they have in the brain. To do so, McCabe plans to use a similar string of technologies that link genetic tools to imaging to computer-assisted data analysis—an approach that the researchers have dubbed ‘robogenetics’, or genetics for computers. Robogenetics could turbocharge computer-based data analysis and enable the investigation of biological data by theoreticians, McCabe says. Such interdisciplinary approach, he adds, is one of the goals of the newly opened EPFL Center for Imaging, a hub for advanced imaging and analysis.