The finding could lead to a new class of antibiotics, as well as providing a method for finding other new targets 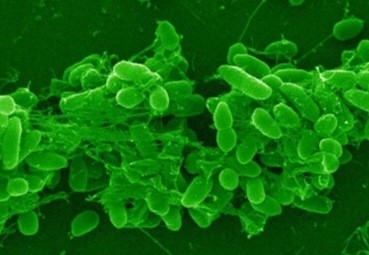 A new study, led by the team of Professor Alain Filloux at Imperial College London and published in Nature Microbiology, has identified a new potential drug target that could be an ideal candidate for the development of novel antibiotics. Lead author Dr Laura Nolan said “Despite constant efforts to develop new antibiotics, levels of antibiotic resistance continue to increase”. Different species, and even different strains of the same species of bacteria, can compete for resources by launching weapons that impair or kill their competitors. One of these weapons is the ‘Type VI secretion system’ (T6SS), a microscopic harpoon, which several bacteria use to fire toxic arrows at other bacteria. While several of these toxins are known, the researchers suspected other toxins, which attack different parts of their rival bacteria, were waiting to be discovered.  Every toxin gene sits next to a gene that encodes for an immunity against that toxin, which prevents cells from killing themselves or their neighbouring sister cells. The team realised that these immunity genes, and neighbouring toxins, could be identified using an approach called transposon directed insertion-site sequencing (TraDIS).

The team made two TraDIS libraries, each containing a pool of millions of bacterial cells that each contain unique transposon insertions across the whole genome. In one library, the T6SS was active and able to produce toxins, and in the other the T6SS was inactive and thus unable to produce toxins. In this case, transposon insertions would only occur in the T6SS inactive library, allowing the team to find differences in the libraries. This led to the identification of previously known T6SS toxins and immunities, as well as a range of new ones. They then studied one of the new toxin genes, known as Tse8, to find out how it was able to harm its competitors. They found that it impacted the functioning of a cell component called the transamidosome complex, which is crucial for protein synthesis in certain bacteria. Tse8 causes the transamidosome complex to ‘gum up’ by overly promoting the recruitment of one of its components, ultimately impairing the growth of the affected bacteria. Professor Filloux said “the transamidosome complex is also crucial for the survival of other pathogenic bacteria, including those that cause meningitis, urinary tract infections, and staph infections, meaning any antibiotic targeting it could have a range of uses. At the same time, the new antibiotic would not harm the so-called ‘good’ bacteria that live in our gut and support our health”.