Researchers developed a device that can deliver electrical signals to and from plants, opening the door to new technologies that make use of plants 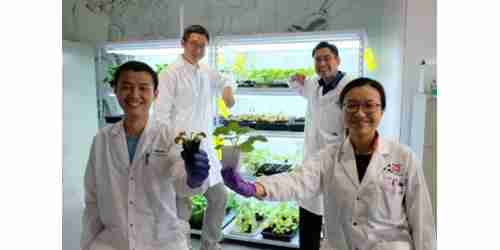 A team of scientists led by Nanyang Technological University, Singapore (NTU Singapore) has developed a device that can deliver electrical signals to and from plants, opening the door to new technologies that make use of plants. The NTU team developed their plant ‘communication’ device by attaching a conformable electrode (a piece of conductive material) on the surface of a Venus flytrap plant using a soft and sticky adhesive known as hydrogel. With the electrode attached to the surface of the flytrap, researchers can achieve two things: pick up electrical signals to monitor how the plant responds to its environment, and transmit electrical signals to the plant, to cause it to close its leaves.

Plants’ electrical signals are very weak, and can only be detected when the electrode makes good contact with plant surfaces. The hairy, waxy, and irregular surfaces of plants make it difficult for any thin-film electronic device to attach and achieve reliable signal transmission. To overcome this challenge, the NTU team drew inspiration from the electrocardiogram (ECG), which is used to detect heart abnormalities by measuring the electrical activity generated by the organ. As a proof-of concept, the scientists took their plant ‘communication’ device and attached it to the surface of a Venus flytrap – a carnivorous plant with hairy leaf-lobes that close over insects when triggered.

The device has a diameter of 3 mm and is harmless to the plant. It does not affect the plant’s ability to perform photosynthesis while successfully detecting electrical signals from the plant. Using a smartphone to transmit electric pulses to the device at a specific frequency, the team elicited the Venus flytrap to close its leaves on demand, in 1.3 seconds.

The researchers have also attached the Venus flytrap to a robotic arm and, through the smartphone and the ‘communication’ device, stimulated its leaf to close and pick up a piece of wire half a millimetre in diameter.

Their findings, published in the scientific journal Nature Electronics in January, demonstrate the prospects for the future design of plant-based technological systems, say the research team. Their approach could lead to the creation of more sensitive robot grippers to pick up fragile objects that may be harmed by current rigid ones. The research team envisions a future where farmers can take preventive steps to protect their crops, using the plant ‘communication’ device they have developed.