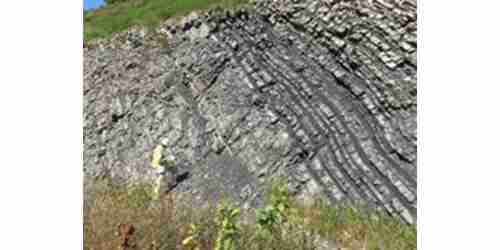 In a new study, published in the journal Nature, researchers looked at samples from rocks spanning the last three billion years and found evidence of a dramatic change in how the carbon cycle functioned about 400 million years ago, when plants started to colonise land. Since clay forming in the ocean (reverse weathering) leads to carbon dioxide being released into the atmosphere, while clay on land is a by-product of chemical weathering that removes carbon dioxide from the air, this reduced the amount of carbon in the atmosphere, leading to a cooler planet and a seesawing climate, with alternating ice ages and warmer periods. The researchers suggested the switch was caused by the spread of land plants keeping soils and clays on land, stopping carbon from being washed into the ocean, and by the growth in marine life using silicon for their skeletons and cell walls, such as sponges, single-celled algae and radiolarians (a group of protozoa), leading to a drop in silicon in the seawater required for clay formation. Senior author Dr Philip Pogge von Strandmann (UCL Earth Sciences) said: “Our study suggests that the carbon cycle operated in a fundamentally different way for most of Earth’s history compared to the present day. “The shift, which occurred gradually between 400 to 500 million years ago appears to be linked to two major biological innovations at the time: the spread of plants on land and the growth of marine organisms that extract silicon from water to create their skeletons and cells walls.

First author Boriana Kalderon-Asael said: “By measuring lithium isotopes in rocks spanning most of Earth’s history, we aimed to investigate if anything had changed in the functioning of the carbon cycle over a large time scale. We found that it had, and this change appears to be linked to the growth of plant life on land and silicon-using animal life in the sea.” In the study, researchers measured lithium isotopes in 600 samples of rock taken from many different locations around the world. When clay forms slowly on land, it strongly favours lithium-6, leaving surrounding water enriched with the other, heavier isotope, lithium-7. Analysing their samples using mass spectrometry, the researchers found a rise in the levels of lithium isotope-7 in seawater recorded in the rock occurring between 400 and 500 million years ago, suggesting a major shift in Earth’s clay production coinciding with the spread of plants on land and emergence of silicon-using marine life.