Chrysalis, the lost moon that gave Saturn its rings

Scientists show that the rings and the tilt are intimately linked, and that the key is a former moon of Saturn that was torn apart some 160 million years ago to form the rings. 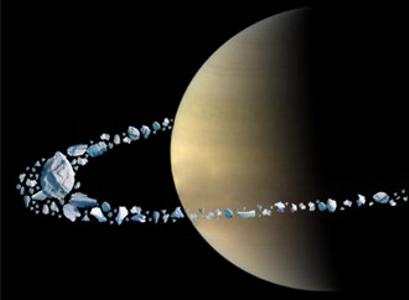 Scientists show that the rings and the tilt are intimately linked, and that the key is a former moon of Saturn that was torn apart some 160 million years ago to form the rings.

Rings appear to be common around planets in the solar system, but the dramatic rings of Saturn have long puzzled astronomers, as has the steep tilt of the rings and the planet’s rotation axis relative to its orbit around the sun.

Scientists now show that the rings and the tilt are intimately linked, and that the key is a former moon of Saturn that was torn apart some 160 million years ago to form the rings. The researchers dubbed the lost moon Chrysalis because it blossomed into the rings much as a chrysalis transforms into a butterfly.

The new proposal for how Saturn became “Lord of the Rings” in our solar system and how Saturn got its axial tilt will be published this week in the journal Science. The lead author is Jack Wisdom, a professor of planetary science at the Massachusetts Institute of Technology (MIT), with key contributions from Burkhard Militzer at the University of California, Berkeley.

Militzer, UC Berkeley professor of earth and planetary science, was part of a team that in 2019 concluded that the rings of Saturn are relatively recent, having formed a mere 100 million years ago and perhaps even more recently. The planet itself is as old as the solar system, about 4.5 billion years. The rings could be debris left over from the tidal destruction of a former icy moon of Saturn or the remains of a comet that strayed too close to the planet.

The new theory proposes that the rings are from a former moon and provide an estimate of how massive that moon was — about the size of Iapetus, Saturn’s third-largest moon — and why the moon got so close to the planet that it was torn apart. The researchers conclude that about 99% of Chrysalis ended up swallowed by the gas giant planet, with the remainder forming the rings.

“The tilt is too large to be a result of known formation processes in a protoplanetary disk or from later, large collisions,” Wisdom said. “A variety of explanations have been offered, but none is totally convincing. The cool thing is that the previously unexplained young age of the rings is naturally explained in our scenario.”

The dance between Saturn and Neptune

Astronomers have suspected before that Saturn’s axial tilt comes from gravitational interactions with its outer companion, Neptune, because Saturn’s tilt precesses, like a spinning top, at nearly the same rate as the precession of the orbit of Neptune. Such an interaction is called a resonance.

In the new study, the researchers conclude that, for billions of years, Neptune and Saturn were in a resonant dance that caused the tilt of Saturn’s spin axis. But the outward movement of Saturn’s moon Titan — the second-largest moon in the solar system — destabilized the Saturn system, causing it to lose a moon and fall out of resonance. The result? A bright and beautiful set of rings that grace the planet today.

Like most planets, Saturn likely formed with its rotation axis perpendicular to its orbital plane. The planet’s rapid rotation slightly flattened its shape, allowing the sun and other planets to exert a torque that tilted the axis. Saturn’s 83 known moons — in particular, Titan — provided other levers to tug on. Over the history of the solar system, such tugs not only tilted Saturn’s axis, but caused the axis to wobble, or precess, like a top. Earth’s rotation axis also precesses.

One explanation for the large tilt of Saturn’s rotation axis today — currently 26.7 degrees versus Earth’s 23.5 degrees — is that the precession is locked in a resonance with the precession of the orbit of Neptune, a planet half its size and more than three times farther from the sun than Saturn. This resonance would have turned a slight tilt of Saturn’s rotation axis into a big tilt.

Several years ago, a study concluded that the two planets are still locked in resonance, but Wisdom found it hard to confirm that result, primarily because the angular momentum of Saturn was not precisely known. The higher the angular momentum — a product of a planet’s spin rate and its moment of inertia, that is, the distribution of mass within the planet — the more resistant a system is to torques from the sun or other planets.

“Jack came to us and said, “The only thing I don’t know for sure is this angular momentum,’” Militzer said. “If it’s very large, then the system is in resonance, and Neptune can do the job: We understand why the planet formed spinning vertically, and Neptune has tilted it over time. If, on the other hand, the angular momentum is small, then the whole thing falls apart, and you have to come up with some other theory why Saturn would spin on its side.”

Thanks to measurements of Saturn’s gravity field made by the Cassini mission in 2017 — the same measurements that allowed Militzer and his colleagues to estimate the mass of the rings and their age — Militzer and co-authors were able to provide a more precise determination of the planet’s moment of inertia and to calculate the angular momentum. Surprisingly, it turned out to be just a tiny bit too small for the two planets to be in resonance today. But calculations showed that Saturn would have been in resonance if it had once had an additional moon.

So how, then, did Saturn get out of its multi-billion-year resonance with Neptune? In computer simulations, Wisdom and his colleagues tested various scenarios. The most likely, they found, is that Saturn’s moon Titan — which currently is migrating rapidly outward from the planet at some 11 centimeters per year — at some point got in resonance with the orbit of another moon, Chrysalis, destabilizing its orbit. Chrysalis eventually came so close to Saturn that the planet’s gravity tore it apart, with a portion of it settling into a ring. Given Titan’s current migration rate, that would have happened between 100 and 200 million years ago, they determined, matching the current estimate of the age of the rings.

“You’re losing this whole moon, and then you can have one less handle to jerk Saturn around,” Militzer said.

The researchers hope that more precise measurements of the motions of Neptune and of Saturn and its moons will confirm their hypothesis.

“It’s a pretty good story, but like any other result, it will have to be examined by others,” Wisdom said. “But it seems that this lost satellite was just a chrysalis, waiting to have its instability.”