Chipping away at the many unknowns of obscure animal viruses 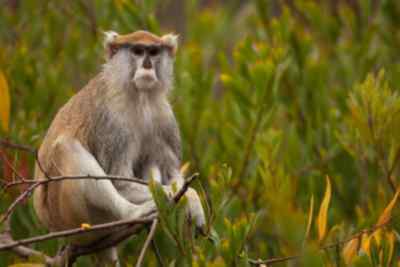 Patas monkeys are among the wild African monkeys believed to be natural reservoirs for the simian hemorrhagic fever virus. Photo: Getty Images

Researchers have identified enough biological details about a virus endemic in African primates to suggest that this virus, which causes a hemorrhagic fever disease in monkeys, has decent potential to spill over to humans.

The findings suggest a surveillance program is warranted for citizens in Africa who may be at risk for exposure to the virus. But the study teaches a much larger lesson as well, researchers say: It’s never too early to start preparing for the next animal virus to come along and unexpectedly cause disease in people.

“There are a lot of unknown animal viruses out there that may pose risk to humans,” said Cody Warren, first author of the study and assistant professor of veterinary biosciences at The Ohio State University.

“We need to be prospectively looking at animal viruses that have been ignored to see if they have the capacity to replicate in human cells. If they do, will we continue to ignore them? I don’t think we should,” he said.

Warren completed this work at the University of Colorado Boulder as a postdoctoral researcher in the lab of senior author Sara Sawyer, professor of molecular, cellular & developmental biology.

The virus the team studied is called simian hemorrhagic fever virus (SHFV), which exists in its natural reservoir, wild African monkeys, without causing any observable signs of disease. It is associated with several deadly outbreaks in rhesus monkey colonies worldwide, showing that the virus can kill when it enters a non-natural host. No known human infections have been documented.

SHFV is one of a dozen or so simian arteriviruses that have been identified to date circulating in wild African monkeys. Other labs’ previous research on arterivirus strains that infect pigs gave Warren and colleagues a good starting point for their investigation into what kind of protein SHFV uses to gain access to host cells.

In this new study, researchers determined in cell culture experiments that a receptor protein known as CD163, located inside a compartment within a cell’s cytoplasm, acts as a gatekeeper for this virus to infect a cell. And it turns out that human immune cells called myeloid cells circulating in the blood and our bodies’ tissues contain this very same receptor. But the human similarities to the primate hosts for this virus don’t stop there.

“We took another leap forward to show that human genetics were fully compatible with replicating and producing this virus,” Warren said. “Just because a virus can replicate in a monkey cell doesn’t mean it can in human cells. But in this case, it does.”

Preliminary findings in multiple cell lines also suggested that while SHFV is using humans’ cell machinery to make copies of itself and spread, the virus is simultaneously subverting the host cells’ ability to fight back – scientists showed that SHFV could readily grow in cells that are responsive to interferon, a cell’s early defense mechanism against viruses.

“We don’t yet understand how this virus interacts with the whole system – can it take down the entire interferon defense system, or simply evade it?” Warren said. “Those are key questions we have moving forward.”

Warren’s lab focuses on animal viruses that have potential to spill over to humans, and on understanding the kinds of hurdles these viruses must overcome in order to infect a new host species. Staying ahead of viruses in this way ideally would position scientists to respond with surveillance testing capabilities and therapies when such a spillover event occurs.

“We didn’t know SIV existed prior to the emergence of HIV – it was a complete unknown,” Warren said. “Since HIV, there has been an onslaught of virus after virus jumping from animals to infect people: SARS, MERS, Zika, West Nile, SARS CoV-2. This is likely something that is going to continue.

“If SHFV were to cause an outbreak tomorrow, we wouldn’t have therapeutics, but we now can prospectively look at potential drugs that could stop these viruses,” he said. “Just because animal viruses are obscure doesn’t mean they should remain in obscurity. Things can change very quickly, as HIV has taught us.”