Researchers have discovered a way to create slow movements using just chemistry and applied it to microrobotics. 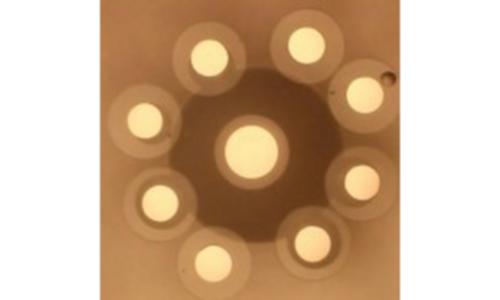 Organisms, from bacteria to human beings, have autonomy in large part because of locomotion — the conversion of stored energy into slowly repeating electrical and mechanical signals that allow organisms to move around.

But these types of relatively slow movements, called low-frequency oscillations, are difficult to recreate in electronic devices. Researchers’ inability to do so has created a major roadblock in developing fully autonomous microscopic robots.

Now, a team led by Northwestern University and the Massachusetts Institute of Technology (MIT) has discovered a way to create slow movements using just chemistry and applied it to microrobotics. With the discovery also comes a new understanding of thermodynamics in which asymmetry and difference benefits a system.

“There are currently no methods for generating slow oscillations in microrobots,” said Thomas A. Berrueta, co-first author and a Ph.D. candidate in the Center for Robotics and Biosystems at Northwestern. “To do so using electronic devices would require much more computation than is feasible at these scales.”

The findings will be published Oct. 6 in the journal Nature Communications. Berrueta’s co-first author, Jing Fan Yang, is a graduate student at MIT.

To conduct the study, the engineers first created an oscillator formed by the interactions of a pair of active microparticles that rested on top of a drop of hydrogen peroxide. To the team’s surprise, the more particles that were introduced, the more stable the movement became — but only when the particles had very different levels of chemical reactivity. To understand this “asymmetry-induced order,” the team developed a new theory of thermodynamics that explains the emergence of such behaviors in their system and many others.

“Our idea stemmed from the thought that design principles that allow us to make reliable machinery at large scales may not actually apply at the scales we’re working at,” Berrueta said. “Think about biology, where we know the molecular machinery of cells is very robust despite being messy and imprecise.”

Precision engineering, a strategy involving the design of extremely accurate machinery, is the predominant technique throughout many fields of engineering. But Berrueta, inspired by the research of Adilson Motter, a professor of physics and astronomy at the Northwestern Weinberg College of Arts and Sciences who studies asymmetry in networks and complex systems, thought he could try a different strategy.

After their discovery that asymmetry also can be beneficial to creating spontaneous orderly movements, the team put their theory to the test using a tiny robotic arm. By introducing a more reactive particle (thereby breaking symmetry) and adding more standard particles, the researchers found they could create consistent, cyclical movement in a microrobotic arm.

Todd D. Murphey, professor of mechanical engineering at Northwestern’s McCormick School of Engineering, a senior author of the paper and Berrueta’s advisor, said moving away from precision engineering could benefit more projects and fields than this one and will drive the future autonomy in microrobots.

“There’s an assumption that sameness is better in engineering,” Murphey said. “But we need to be sure that precision-oriented approaches actually help the applications we care about. In some cases irregular parts will actually be better — and making components that aren’t perfectly the same could be cheaper.”

The paper has sparked new ideas across the collaboration, and Berrueta said he’s excited to see where else the team’s ideas will apply.

“We’re going to keep collaborating,” Berrueta said. “The idea of imprecision-based design is about as scalable as it gets. We expect it to be very fruitful across areas of robotics and AI, as well as micro- and nanoscale engineering.”