Previously thought to be irreversible once initiated, can in fact be halted and controlled, shows new study 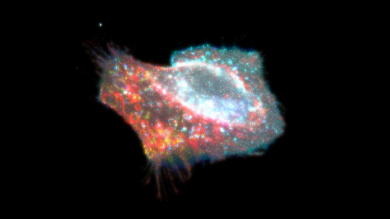 A composite image of a cell throughout pyroptosis. (Image: Gary Mo, et al.)

A study published by researchers at the University of Illinois Chicago describes a new method for analyzing pyroptosis — the process of cell death that is usually caused by infections and results in excess inflammation in the body — and shows that process, long thought to be irreversible once initiated, can in fact be halted and controlled.

The discovery, which is reported in Nature Communications, means that scientists have a new way to study diseases that are related to malfunctioning cell death processes, like some cancers, and infections that can be complicated by out-of-control inflammation caused by the process. These infections include sepsis, for example, and acute respiratory distress syndrome, which is among the major complications of COVID-19 illness.

Pyroptosis is a series of biochemical reactions that uses gasdermin, a protein, to open large pores in the cell membrane and destabilize the cell. To understand more about this process, the UIC researchers designed an “optogenetic” gasdermin by genetically engineering the protein to respond to light.

“The cell death process plays an important role in the body, in both healthy states and unhealthy ones, but studying pyroptosis — which is a major type of cell death — has been challenging,” said Gary Mo, UIC assistant professor in the department of pharmacology and regenerative medicine and the department of biomedical engineering at the College of Medicine.

Mo said that methods to examine the pyroptosis mechanisms at play in live cells are difficult to control because they are initiated by unpredictable pathogens, which in turn have disparate effects in different cells and people.

“Our optogenetic gasdermin allowed us to skip over the unpredictable pathogen behavior and the variable cellular response because it mimics at the molecular level what happens in the cell once pyroptosis is initiated,” Mo said.

The researchers applied this tool and used florescent imaging technology to precisely activate gasdermin in cell experiments and observe the pores under various circumstances. They discovered that certain conditions, like specific concentrations of calcium ions, for example, triggered the pores to close within only tens of seconds.

“This showed us that this form of cell death is not a one-way ticket. The process is actually programmed with a cancel button, an off-switch,” Mo said. “Understanding how to control this process unlocks new avenues for drug discovery, and now we can find drugs that work for both sides — it allows us to think about tuning, either boosting or limiting, this type of cell death in diseases, where we could previously only remove this important process.”

Source: Based on University of Illinois Chicago news release