Scientists create tiny mechanical capsules that can pick up, carry, and release cargo on cue 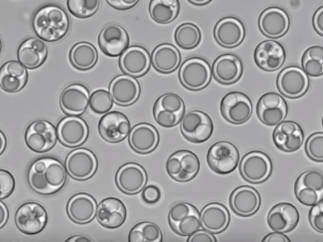 Scientists from the University of Chicago and New York University have created a way to make tiny mechanical capsules that can pick up, carry, and release cargo on cue. The results published in Nature, could potentially have applications in medicine, pollution clean-up, or robotics. “This is proof of concept of a very powerful piece of machinery, at a scale that’s difficult to achieve with other methods,” said Prof. William Irvine of UChicago, the co-corresponding author on the study. The capsules are thin oil shells filled with delicious innards of your choice, not unlike the popping “boba” bubbles that you can get in milk tea, smoothies or frozen yogurt. But unlike boba, each capsule is only two microns across—a little bit smaller than a single red blood cell. They can be made to release their cargo on cue when exposed to light or a change in pH. The scientists imagine multiple potential uses for the capsules, such as delivering drugs to specific areas of the body, cleaning up pollution or even microbes, or in building micromachines or soft robots.

To make the capsules, the researchers start with droplets of oil that they inflate like balloons using chemical reactions. Then they harden the shell by polymerizing it. Each capsule has an even tinier hole, and inside sits a tiny pump that can be activated to either suck in or expel liquid from the capsule’s surroundings. “Having an autonomous particle that can actively ingest or expel material—that’s a highly desirable property, because now you can think of it as a microcontainer that you can fill at will,” said Sacanna. “The applications here are really up to your imagination.” For example, they could be used for vacuuming up unwanted particles: “Think of them like the Pac-Man video game—they go around eating the pollutants and removing them from the environment,” Sacanna said. That could even include viruses and bacteria; In the paper, they demonstrated using the system to suck up E. coli bacteria. “Or you can imagine stuffing them with medicine, and then engineer them to release the medicine only when they get where you want them in the body,” Irvine said. There are also potential applications in robotics and micromachines, or to build an artificial cell that mimics the functions of biological cells.